Buffalo State College’s alma mater is getting a makeover. The college is holding a contest, open to anyone who’s part of the Buffalo State community, to rewrite the lyrics of the alma mater for the 150th anniversary of the college.

The current alma mater, “Our Finest Hour,” was written by L. Harry Ray and was first published in the Elms yearbook in 1951, Ray’s graduating class year. His version was reintroduced to campus in 1993, when the college held its Commencement ceremonies on campus—in the newly built Sports Arena—for the first time in 23 years. By the time Buffalo State held its quasquicentennial celebration three years later, during the 1996–1997 academic year, “Our Finest Hour” had become a cherished campus tradition, and the song has been sung by the college choir at Commencement ceremonies ever since.

It’s time for an update, said Victoria J. Furby, associate professor and chair of the Music Department. “I think it’s time for us to have something that’s more reflective of the mission of the college and the student population as it exists now.”

The contest rules can be found online, and submissions will be judged by the Alma Mater Committee, composed of five faculty members and administrators who will review the submissions. The deadline is Sunday, February 28, at 5:00 p.m.

“It’s an exciting chance to be a part of Buffalo State’s story going forward,” Furby said.

The committee will make three selections and present them to President Katherine Conway-Turner, who will make the final decision.

The alma mater has had several iterations over the history of Buffalo State. For instance, in the 1913 Elms yearbook, the song is listed as “Class Song,” and its lyrics pay homage to the Buffalo Normal School, as the college was known at the time.

“Then farewell, dear Buffalo Normal, though we must leave thy care, we'll always love and cherish our alma mater fair,” the lyrics read.

In fact, many early editions of the Elms contain different versions of an alma mater. Even the 1999 Elms got in on the action, reprinting a self-titled alma mater from 1928, written by Helen M. Buyolark.

“A branch that is lifeless and fragile, when caught by the gleam of red coals, is fanned to a quivering torch flame; so love changes all human souls. So we whom you love, Alma Mater, are touched by the warmth and the glow,” Buyolark’s lyrics read.

A November 1916 issue of the Record student newspaper lists the alma mater as “By Niagara’s Rippling Waters,” by Ruth M. Rounds. Its lyrics pay tribute to the college without ever mentioning its name, just its location in the city at the time—on Buffalo’s lower West Side.

“By Niagara’s rippling waters stands our city’s pride, dearer to her sons and daughters than all else besides,” they read.

The college used to have “interclass sings,” according to a 1943 version of the Record. Each class would sing a verse of the alma mater, and they’d sing other songs, as well.

In a 1928 issue of the Record, a student laments the lack of singing of the alma mater during assemblies in an anonymous contributor column. The student implores other students to write their own versions of the alma mater, and announces a competition to do just that.

“Show us what you can do. Pick your music, write your verse, put them together, pre­sent your song and hope that the prize is yours,” the student writes. “When we sing in our assemblies, we ought to be heard for a block around. Never mind the neighbors, they’ll take care of themselves.”

There are actually several songs dedicated to Buffalo State, recorded and forever saved for posterity in the school’s digital archives. Take a look and listen. And then, write you own and join the fun!

A toast to State, to all the days,
All the laughter, all the tears.
You have made our friendships great,
We’ll triumph through the years.
With hope anew we’ll face the storm
Beyond which stands your lofty tower –
That will be our finest hour.

In years to come we’ll look to thee,
Yearning for your guiding light.
You’ll not fail us, Alma Mater,
Keep us through the night.
When darkness comes and all hope dies,
You will give us strength and power –
That will be our finest hour. 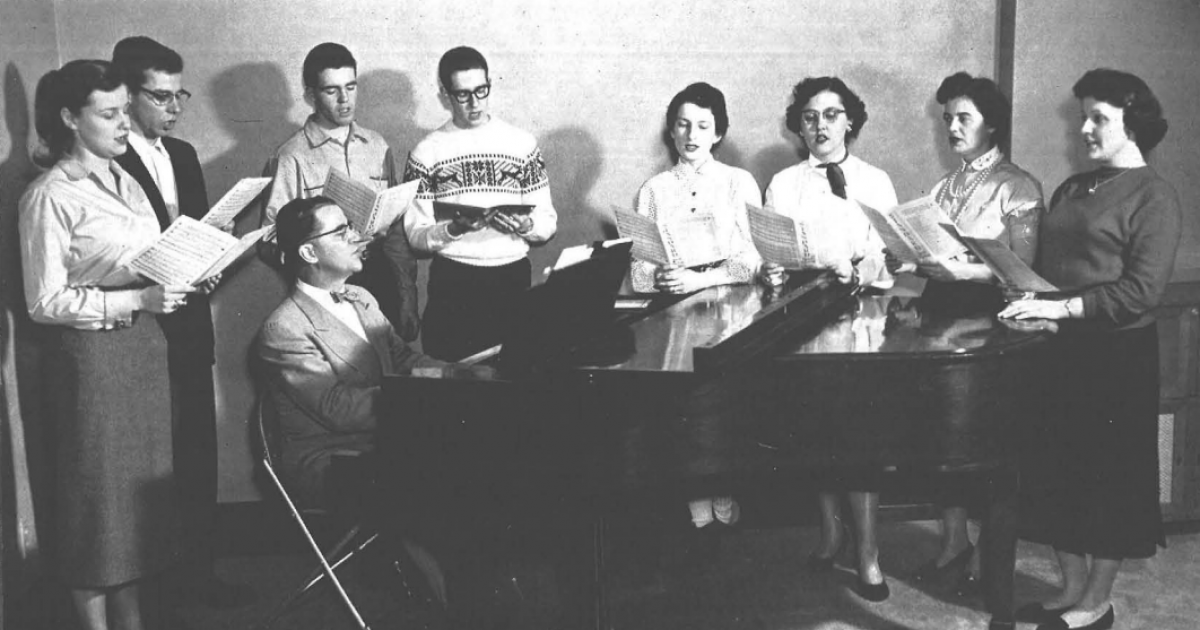 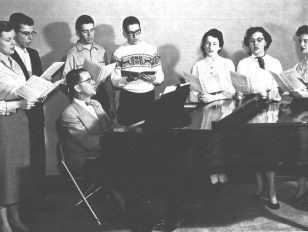