Six of Buffalo State’s most accomplished alumni were recognized this fall for their contributions to the campus and community. The 2022 Distinguished Alumnus Award was presented to Dianne Baumert-Moyik, ’87; Michael Bonitatibus, ’79; Rose Thevenin, ’90; and Rick Kennedy, ’77 (2020), while Julia Bottoms, ’12, ’17, and LaStarsha McGarity, ’19, received the 2022 Young Alumnus Achievement Award. Two ceremonies were held for the honorees in the LoRusso Alumni and Visitor Center, one on Friday, September 23, during Homecoming and Family Weekend, and another on Friday, October 28. Kennedy, who received the Distinguished Alumnus Award in 2020 (during the coronavirus pandemic), was recognized retroactively this year.

The Distinguished Alumnus Award recognizes graduates who have demonstrated significant achievement and recognition in their field; dedication to community service, civic affairs, and volunteerism; and ongoing support for and loyalty to Buffalo State College and its mission.

The Young Alumnus Achievement Award recognizes graduates of the past 20 years who have achieved significant professional advancement and have demonstrated service to the community, as well as loyalty and commitment to the college.

Dianne Baumert-Moyik, ’87
Dianne Baumert-Moyik, a senior public relations official with Northrop Grumman, earned her bachelor of arts in journalism and political science from Buffalo State in 1987, her master’s in communication arts from the New York Institute of Technology in 1992, and her M.B.A. from Dowling College in 2006. She is currently pursuing a doctorate in business leadership at Walden University.

After graduating from Buffalo State, Baumert-Moyik was a reporter and photographer for Suffolk Life newspapers and served in various public relations roles in both the public and private sectors, including press secretary for Nassau County during its fiscal crisis. Following the September 11 terrorist attacks, she provided pro-bono public relations support to firefighter families from the FDNY.

Michael Bonitatibus, retired owner of Millington Lockwood LLC, grew up in Lackawanna and graduated with a bachelor’s degree in secondary education from Buffalo State in 1979. Following graduation, he was employed by Herman Miller and Millington Lockwood, a company he would eventually acquire and lead. Bonitatibus completed the Center for Entrepreneurial Leadership (CEL) Core Program at the University of Buffalo School of Management in 2005.

He joined the Buffalo State College Foundation Board of Directors in 2011, serving on the Finance and Audit Committee, as treasurer, and as chairman of the board for three years. He employed his considerable bridge-building skills to connect the foundation with business leaders and not-for-profit organizations throughout Western New York. He and his wife, Madonna, ’80, served as co-chairs of one of the annual Bengala Foundation Scholarship Gala in 2021. They were also instrumental in formulating the GRIT Scholarship Fund in 2021 to financially support students at Buffalo State.

His extensive volunteer work includes serving on the Kevin Guest House Board of Directors and as vice president of the UB Center for Entrepreneurial Leadership Alumni Board. He currently sits on the boards of directors for Habitat for Humanity of Buffalo, the Buffalo State Housing Corporation, and the Richardson Olmsted Complex. He and Madonna have also supported numerous initiatives at Buffalo State, including the LoRusso Alumni and Visitor Center, the Bridge the Gap program, and the Back on Track program.

Thevenin served as cofounder, director of diversity, equity, and inclusion, and coordinator of academic institutions of the Florida Africana Studies Consortium (FLASC). She also led the Association of Black Women Historians as its national vice director. She was a visiting scholar at Stanford University, Harvard University, Columbia University, and the Rockefeller Archive Center. She coedited the three-volume Encyclopedia of the African Diaspora and, recently, the book Michelle Obama’s Impact on African American Women and Girls (2019).

Thevenin has received multiple awards for her scholarship, educational leadership, and community service, including numerous research grants and fellowships. She was 2003, 2004, 2006, and 2007 Scholar of the Year at Florida Memorial University. She serves on the Executive Council of the Southern Historical Association and multiple committees of the Association for the Study of African American Life and History. Thevenin is also a member of the Southern Association for Women Historians, the Florida Historical Association, and the Organization of American Historians.

After graduating from Buffalo State in 1977 with a bachelor’s degree in political science, Rick Kennedy went on to earn his J.D. from the State University of New York at Buffalo in 1982. He joined Hodgson Russ as an associate attorney in 1983 and became a partner in 1990. His practice has been focused on environmental law and the law governing lawyers. For many years he served in the firm’s Office of General Counsel and on its board of directors and Compensation Committee.

He and his wife, Christine, are founding members of EduNations, an organization responsible for building and operating 15 schools serving 4,000 students in Sierra Leone, West Africa. He also serves on the boards of directors of the Sierra Leone Alliance of WNY and the Chapel at Crosspoint. Kennedy served on the Buffalo State Alumni Association Board of Directors from 1992 to 1995. He has funded travel to regional tournaments for members of the Buffalo State Political Science Department’s Moot Court Team. He has spoken to students on several occasions and has served on the Legal Studies Advisory Board. Kennedy and Hodgson Russ have made significant contributions to Buffalo State, funding a named honors scholarship and contributing to the Burchfield Penney Art Center, the Golf and Tennis Scholarship Fund, and the annual Bengala Foundation Scholarship Gala.

Julia Bottoms earned her B.A. in art in 2012 and her M.S. in multidisciplinary studies in 2017. An accomplished artist who has received local and national attention, she was named to Open Buffalo’s first Emerging Artist Exhibition in 2017, and was one of four artists to paint the Albright-Knox public art installation The Freedom Wall. Her portraits show people of color as sensitive, sincere, and multifaceted, characteristics that she feels are often missing in mainstream portrayals. Her first show, a series that challenged the representations of Black people, particularly Black men, presented her subjects as proud Americans who have persevered with strength and grace.

Bottoms has spoken on campus, at the Burchfield Penney Art Center, the Albright-Knox Art Gallery, the Open Buffalo Emerging Leaders Program, and the Buffalo Arts Studio. Awards for her work and community service include the Housing Opportunities Made Equal (HOME) Sarah G. Metzger Human Rights Award and the Afro-American Historical Association of the Niagara Frontier’s William Wells Brown Award. While at Buffalo State, she received the James Lombardo Sr. Award for Excellence in the Visual Arts (2013). She was the keynote speaker for the 2018 New York State Art Teachers Association Conference and the Crystal People Stokes Annual Women in the Arts Ceremony.

Bottoms has served on the board of directors for the Hallwalls Contemporary Arts Center and is a member of the Buffalo Society of Artists. Her work has been exhibited at the Burchfield Penney Art Center, the Czurles-Nelson Gallery, Hallwalls, and the Albright-Knox. Her portrait Christian, on loan from Gerald Mead, is prominently displayed in the LoRusso Alumni and Visitor Center.

LaStarsha McGarity earned her B.A. in art with a minor in chemistry at Texas Southern University in 2013, and her M.A in art conservation at Buffalo State in 2019. She is currently pursuing a Ph.D. in preservation studies from the University of Delaware with a proposed dissertation on the preservation of collections at Historically Black Colleges and Universities.

McGarity began her career as a student volunteer at the Texas Southern University Museum, where she learned the fundamentals of object handling, collections management, exhibition development, and exhibit installation. From 2012 to 2013, she interned with EverGreene Architectural Arts, where she assisted in the restoration of historic murals by John T. Biggers and his students at Texas Southern University. She was a director’s fellow at the Cleveland Museum of Art, where she developed an exhibition of work on paper featuring African American women to create stronger connections to the predominantly Black population of Cleveland, Ohio, and drafted self-guided tours based on recent conservation projects. In 2015, she was the Andrew W. Mellon Conservation intern at the Smithsonian’s National Museum of African American History and Culture in Washington, D.C., where she later served as a contract conservation technician and digitization specialist. She also served as the Ford Foundation for Diversity Conservation intern at the Smithsonian’s National Museum of African Art.

While a graduate student at Buffalo State, McGarity worked as a conservation intern at the newly opened Museum of Mississippi History and the Mississippi Civil Rights Museum (2MM) in Jackson, Mississippi, and the Brooklyn Museum in New York. In addition, she completed a visiting internship at the newly opened Academy Museum of Motion Pictures in Los Angeles to learn about treating new materials, and an academic-year internship at the St. Louis Art Museum in Missouri.

After earning her degree at Buffalo State, McGarity became the Andrew W. Mellon Fellow in Objects Conservation at the National Gallery of Art in Washington, D.C. She is currently secretary of the Cooperstown/Buffalo State Conservation Alumni Board and was a founding signer of the Black Art Conservators’ call for racial justice in art conservation. 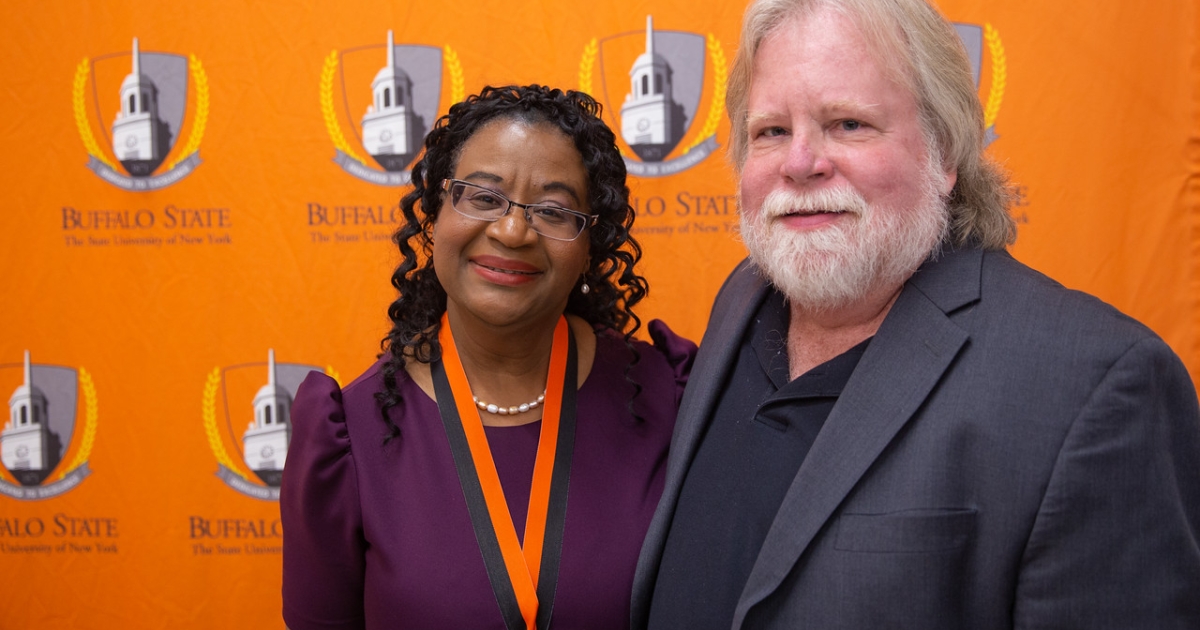 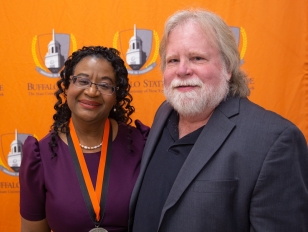