General Colin Powell, who died Monday, October 18, at age 84 of complications from COVID-19, shared wisdom gleaned from his storied career with the Buffalo State College community more than 20 years ago.

Powell was awarded a SUNY Honorary Doctor of Laws during the 11th annual Academic Convocation on campus on September 24, 1998. Powell, a retired four-star general, served as the first Black national security adviser in the United States, chairman of the Joint Chiefs of Staff, and secretary of state, among other significant roles over four decades in public life.

“We are saddened by the loss of such a great leader as General Colin Powell,” said Buffalo State President Katherine Conway-Turner. “We are also humbled and honored that he recognized Buffalo State for its place in the landscape of higher education while on campus receiving the honorary doctor of laws.” 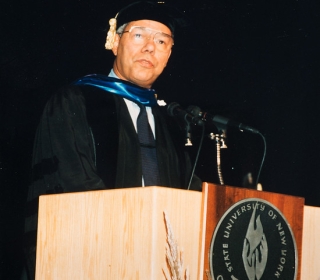 “General Powell was pleased to see his sister’s bio in the convocation program and spoke warmly of her,” Chase said. “He reminded the audience that the average college student might excel in life, thanks to what he or she learned, noting that his sister had been an A student and he had been a C student, but they both did well.”

Included in Powell’s 1995 autobiography, My American Journey, is a photo of him with Berns in front of Kleinhans Music Hall when she was attending Buffalo State. Chase added that Powell also mentioned Buffalo State in his book, saying, “State schools are the Harvard and Yale of the working class.”

Born in the Harlem neighborhood of New York City to Jamaican parents, Powell grew up in the South Bronx and graduated from City College of New York in 1958. He then joined the Army through ROTC and served as a second lieutenant, including two decorated combat tours in Vietnam. He also had military assignments in Korea and Germany.

He earned a master’s degree in business administration from George Washington University and was selected as a White House fellow in 1972. He later was the national security adviser to President Ronald Reagan at the end of the Cold War, helping negotiate arms treaties and an era of cooperation with the Soviet president, Mikhail Gorbachev.

Powell attained the rank of general in 1989 and was subsequently appointed to the Joints Chiefs of Staff. In this capacity he served as principal military adviser to the president, the secretary of defense, and the National Security Council.

At the time of his visit to Buffalo State, Powell was chairing America’s Promise—The Alliance for Youth, the national campaign on behalf of the nation’s young people that was launched in 1997 as the President’s Summit for America’s Future.

“After his address at our convocation, there was to be a highly exclusive VIP reception, which quickly became open to everyone,” Chase recalled. “The general happily greeted all well-wishers and took photos with many individuals, including the president. President Howard gave him a tour of her house, and he noticed a photo of her with James Earl Jones. He quipped, ‘Why do you want my picture when you’ve got James Earl Jones!’” 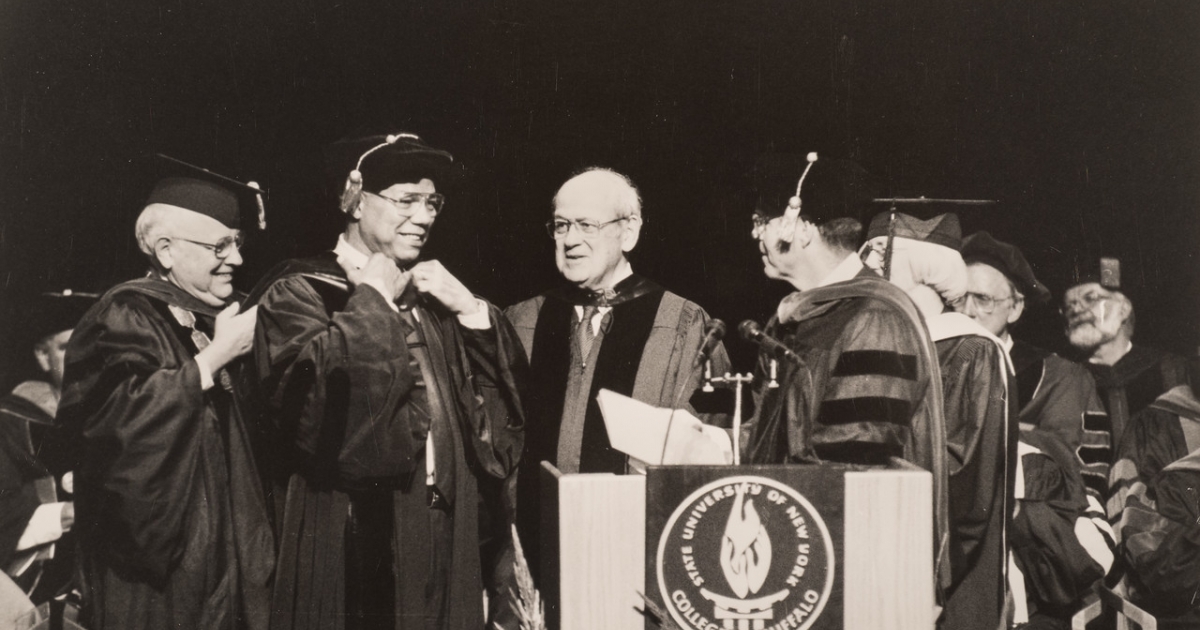 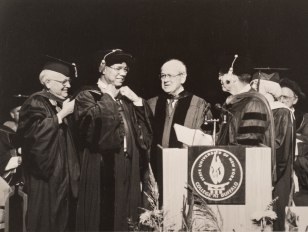