Election Day is quickly approaching, and the Civic and Community Engagement Office (CCE) at Buffalo State College has become the epicenter of voting information and resources to help students learn more about their rights and responsibilities as young voters.

College communities hold significant political sway. Millennials and some members of Gen Z now compose close to 40 percent of eligible voters, according to some estimates.

Aurora Schunk, assistant director of the CCE, emphasized the importance of students understanding that voting is another way to have their voices heard.

“As college students, no one else votes with your concerns in mind,” Schunk said. “Nobody is thinking about health care the way you might be, or public transportation, especially knowing our student demographic. Those are really important issues. If you don’t have access to those things or your voice isn’t heard around those topics, no one else is thinking about them.”

The CCE’s efforts began in early spring with information campaigns about both voter registration and a need for poll workers. Roughly 60 percent of poll workers are over the age of 60—and about a quarter of these are over 70, according to a recent Pew Research Center study. Because of health concerns about COVID-19, fewer have signed up for the job this year.

Through the summer and fall, the CCE created resources for faculty, offering myriad ways to engage and educate students through the curricula. The CCE also partnered with Campus Compact to present the Education for Democracy: Election 2020 Series, a multi-part series aimed at strengthening college students’ commitment to politics and civic engagement. The office developed an extensive Voting Video series on YouTube for more-visual learners. And the Bengal Voting Project featured a series of first-person accounts to encourage and educate first-time voters on what to expect.

The CCE also took to social media to educate young voters on their options and the logistics of voting by building a virtual voting workshop series on Instagram. This live series has covered topics such as voting with an absentee ballot, tips for first-time voters, how to register, completing registration forms, understanding what is on the ballot, and learning about early voting.

“If you want change, and you think society is unfair to you right now, you have to get engaged and you have to stay engaged. You have to make it part of your lifestyle. If you do that, you are going to see the changes you want to see in society.”

Schunk encourages students who are registered to vote to look at their polling options, research candidates, and be prepared to vote November third—if not sooner.

“Ask questions,” she said, “especially knowing that as a Buffalo State student, you have resources on campus. Ask us questions, or if you know someone who has voted before, ask them questions,” Schunk said.

Buffalo State College, through the CCE, recently applied for Voter Friendly Campus designation from the Campus Vote Project and NASPA collaboration. The college is looking to expand its community-focused values through the Civic and Community Engagement Office, which works year-round to promote community engagement and civic action in a multitude of ways outside of the election cycle.

“Hearing about elections and voting and civic engagement is not something that is going to happen just in 2020,” Schunk said. “We want to help students understand how to navigate all the other ways they can get involved civically or in their community.”

Civic Engagement Week in late February featured open dialogues and workshops on a range of topics such as disability rights in New York, the 2020 census, and Higher Education Action Day to teach students about the critical role civic engagement plays in our democracy.

In March, as efforts around the 2020 census were rolled out, the CCE provided extensive web resources, organizer workshops both on campus and in the community, and a broad communication campaign to help students, faculty, and staff understand the census and the effect it has on day-to-day life.

Peter Yacobucci, an associate professor in the Political Science and Public Administration Department, has dedicated his 10 years at Buffalo State to expanding the idea of civic engagement beyond simply voting.

“People need to start thinking of engagement with government and the local community being a constant thing,” he said. “It should be incorporated into your personal life.

“One of my goals coming to Buff State was to increase the idea of civic engagement that is a consistent day-to-day process of thinking and activating those thoughts to get involved in your community,” he said. “Civic engagement is more of a constant lifestyle choice than a one-time act; it’s the idea that everything in society is important to you beyond just yourself.”

Yacobucci encourages students to explore their community and see outside of Buffalo State.

“If you want change, and you think society is unfair to you right now, you have to get engaged and you have to stay engaged. You have to make it part of your lifestyle. If you do that, you are going to see the changes you want to see in society.”

Buffalo State’s chapter of NYPIRG, in collaboration with Student Leadership and Engagement and United Students Government, has also used its platform to educate and register students across campus.

Program coordinator Claudia Mayberry explained the importance of students being active participants in the political system and using their vote as another way to have their voice heard by politicians.

“Students aren’t as active in the political system. The youth age group is actually the least active, so we are trying to register as many students to show politicians that students are active and they demand they pay attention to things like higher education,” Mayberry said.

NYPIRG has offered virtual office hours to allow students to openly ask questions while navigating their voter registration form, along with sharing the registration forms in the Student Union Plaza on Tuesdays and Thursdays through September to educate first-time voters.

Mayberry explained how one of NYPIRG’s missions is to get students involved in a multitude of political issues, and part of that is being involved in voting.

“It shows students that they actually have power in themselves to be active in the system and to make an impact, and it really comes down to students being registered.” 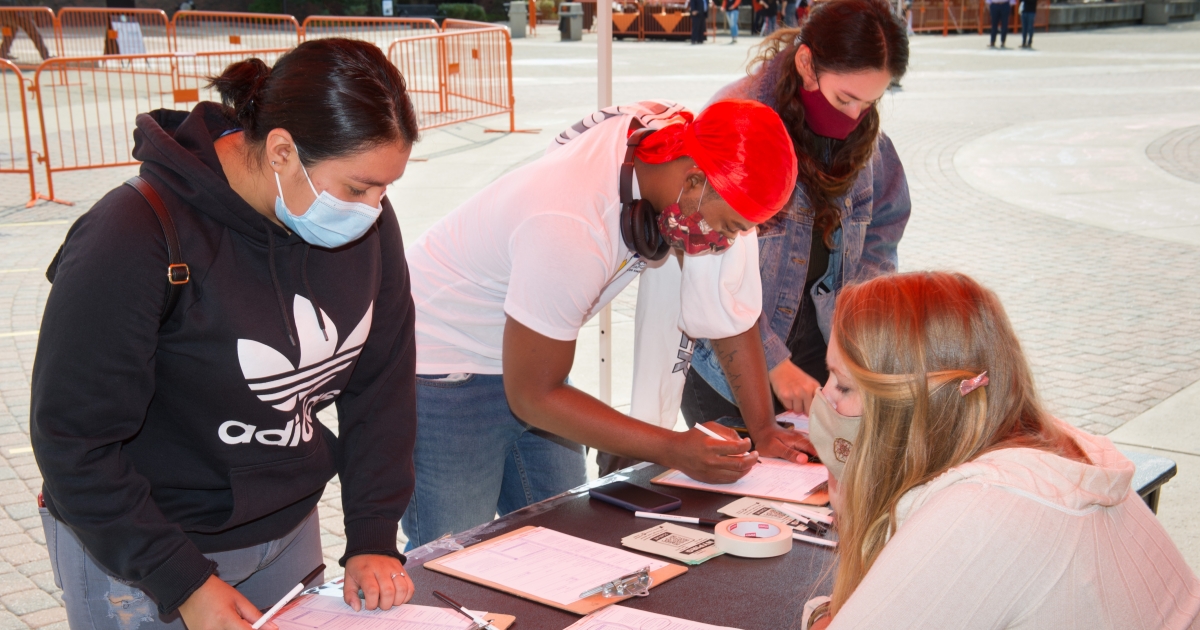 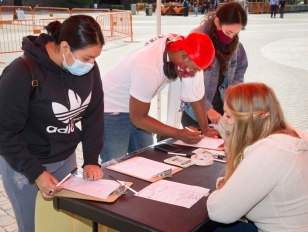