A Buffalo State College production of The Old Maid and the Thief, a 1939 radio opera by Gian Carlo Menotti, combines the talents of a cross-section of students from music, art education, and television and film arts (TFA) in an applied-learning collaborative project.

The performance will be held Thursday, December 2, at 7:30 p.m. in Rockwell Hall’s Ciminelli Recital Hall. It is free and open to the public. It will also be livestreamed over Facebook.

Holly Bewlay, associate professor of voice, is directing the production, featuring five students from her Vocal Chamber Music course in the 14-scene comic opera, which is sung in English with piano accompaniment.

“I thought it would be an inspiring opera for the students since Menotti was only 23 years old when he wrote it,” said Bewlay, who also directed ​and produced Buffalo State’s first student-performed opera, Henry Purcell’s seventeenth-century Dido and Aeneas, in spring 2019.

“I was so happy that they both agreed,” Bewlay said.

“The story is about the fear of being alone, and how life is full of disappointments and broken promises.”

Fourteen students in Annas’s Producing Short Films course filmed the singers acting in three scenes. Those scenes, each three- to five-minutes long, will be screened in lieu of live singing.

“I’m so appreciative of this collaboration initiated by Dr. Bewlay,” Annas said. “This project is such a great opportunity, requiring our TFA students to take lyrics from the opera and adapt them into cinematic moments on screen. So many cinematic works are adapted from other areas in the arts, and experiences such as this give our students more tools for storytelling.”

Meanwhile, 17 students in Masters’s Functions and Practice in Art Education created expressive abstract paintings inspired by the opera’s music. The paintings will be projected on a screen throughout the performance.

The Old Maid and the Thief tells the story of a middle-aged spinster, Miss Todd (Alyssa Agro), who lives a lonely existence with her young maid, Laetitia (Maria Taravella). Todd’s friend, Miss Pinkerton (Jenna Agro and Trinity Ridout), another spinster, often visits and they gossip. When a handsome, mysterious visitor, Bob (Zachary Shaffer), finds his way into Todd’s home, the women in the household become smitten with him and attempt to buy his love by any means necessary.

“The story is about the fear of being alone,” Bewlay said, “and how life is full of disappointments and broken promises. It also speaks to the way Menotti viewed people who talked about being Christian but acted completely the opposite.”

“Even though Old Maid was written in the 1930s, it feels surprisingly modern,” Agro said. “The comic elements make it easier to relate to than Dido.”

Masters said her students prepared for the collaborative project by studying the work of Wassily Kandinsky, whose paintings were influenced by the composer Arnold Schoenberg, along with the more contemporary artist James Pappas, whose work was inspired by jazz music and is on display at the Burchfield Penney Art Center.

“Following the run-through of the show, students from the two programs engaged in a reflective discussion about the similarities between art and music,” Masters said. “We also discussed the shared vocabulary of music and art, exploring the many surprising parallels of the two art forms.”

Taravella, a senior music major with a concentration in performance, said performing in an opera requires more independence than singing with a choral group.

“Menotti’s music is different from what I’ve heard,” she said, “and performing this opera helped all of us to grow musically.”

For more information about The Old Maid and the Thief, please contact the Music Department, (716) 878-6401.

“Even though Old Maid was written in the 1930s, it feels surprisingly modern. The comic elements make it easier to relate to.” 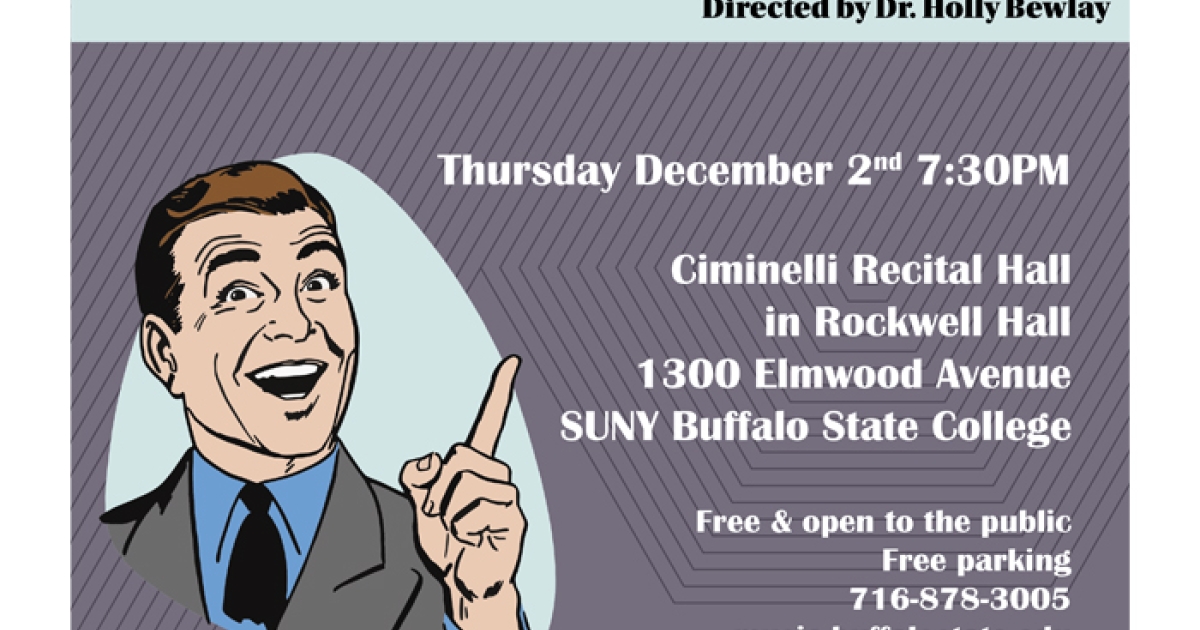 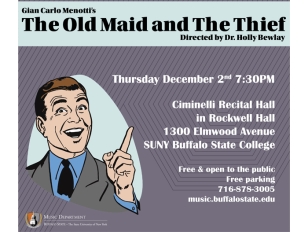