When Becket Panfil was a senior at Lake Shore High School, dreaming of a career in law enforcement and searching for a college, he had a few requirements.

He wanted to stay close to his Angola, New York, home; study criminal justice, bolstered by a degree in business administration; be academically challenged; and receive financial support. While he found all of the above at Buffalo State College, what sealed his decision was his acceptance into the college’s Muriel A. Howard Honors Program.

“The Honors Program came with a couple of cool scholarships that took the financial burden off my shoulders,” Panfil said, referring to the Presidential and the Ross B. Kenzie Family scholarships, which covered the bulk of his college expenses.

“The Honors Program has other perks,” he said. “Hands down, the best one is priority registration. This gives us the very best selection of classes; I’ve never been turned down on a class I’ve tried to enroll in due to the class being full.”

Panfil was also drawn to the college’s strong criminal justice program, which he chose for his minor, paired with a major in business administration.

“Stay open to opportunities, some of which may be off your radar. You’re only going to be here once. Take advantage of opportunities that come your way.”

“Law enforcement officers I spoke with told me a business degree helps you get a good base background,” he said. “When it comes to promotions, departments can see that you have management skills and communication skills. Buffalo State was a really good fit.”

Now a junior, Panfil is on his way to making his dream a reality. He has made the dean’s list every semester, even while taking a rigorous slate of classes.

“Mr. Panfil was one of my best students,” said Martin Littlefield, professor of criminal justice, who had Panfil for Introduction to Criminal Justice and Criminal Law. While Panfil excelled in both courses, Littlefield said of the latter, “Mr. Panfil demonstrated an even higher degree of understanding and insight into complex legal issues and related matters.”

Likewise, Panfil was impressed with Littlefield, who served as a federal prosecutor for the Western District of New York for almost 30 years.

“It was cool to get his perspective on the field that I couldn’t have gotten from a textbook,” Panfil said. “It was a gift to have met him.”

Dan Schwartz, an attorney and lecturer of business administration who had Panfil in three of his courses, said he knew Panfil would be a good student soon after meeting him. Schwartz quipped that in order to make the job easier for him and his colleagues, he’d like to write a grant to have Panfil cloned.

“My estimation of his virtues and abilities has only grown over the time I’ve known him,” Schwarz said.

Outside of class, Panfil has gotten involved with the campus group Chi Alpha, or Christ’s Ambassadors, where he’s made some of his closest friends. Before the pandemic, the students met for lunch every weekday in the Campbell Student Union and held regular meetings to discuss biblical topics and relax together.

“Since the pandemic, we’ve been meeting virtually quite a bit,” he said.

For the past two years, Panfil has worked part time at Lockwood’s Greenhouses and Farm in Hamburg, which had a fortuitous influence on his college career. In August 2019, he met New York Lieutenant Governor Kathy Hochul while she was shopping for plants with her husband, and they chatted about his schooling and career plans.

“The internship is a great experience to have on my résumé,” he said. “Apart from the experience, police departments will see that I already passed a rigorous background check, so I’m likely to pass one again.”

Panfil is on target to graduate in December 2021. He’s considering applying to the police academy to work with local law enforcement departments or seek work at the state or federal level.

Regardless of which path he chooses, Panfil said, Buffalo State has prepared him well, not only academically but in boosting his confidence to seek new opportunities.

Over the last two years, he said, he’s stepped outside his comfort zone, thanks to the advice of a few professors, such as Amy McMillan, professor of biology, who directs the Honors Program.

“Dr. McMillan has encouraged us to stay involved, keep an open mind, and take courses we might not have thought of before, just to broaden our perspective,” Panfil said.

As a result, Panfil took the rather esoteric course Artic Geography from an Inuit Perspective with Stephen Vermette, professor of geography and planning, which ended up being his favorite class thus far.

Staying open to opportunities, some of which may be off your radar, is his biggest piece of advice for new students.

“You’re only going to be here once,” he said. “Take advantage of opportunities that come your way. Try new things. Don’t be afraid to meet new people and make new friends. Use this time wisely.” 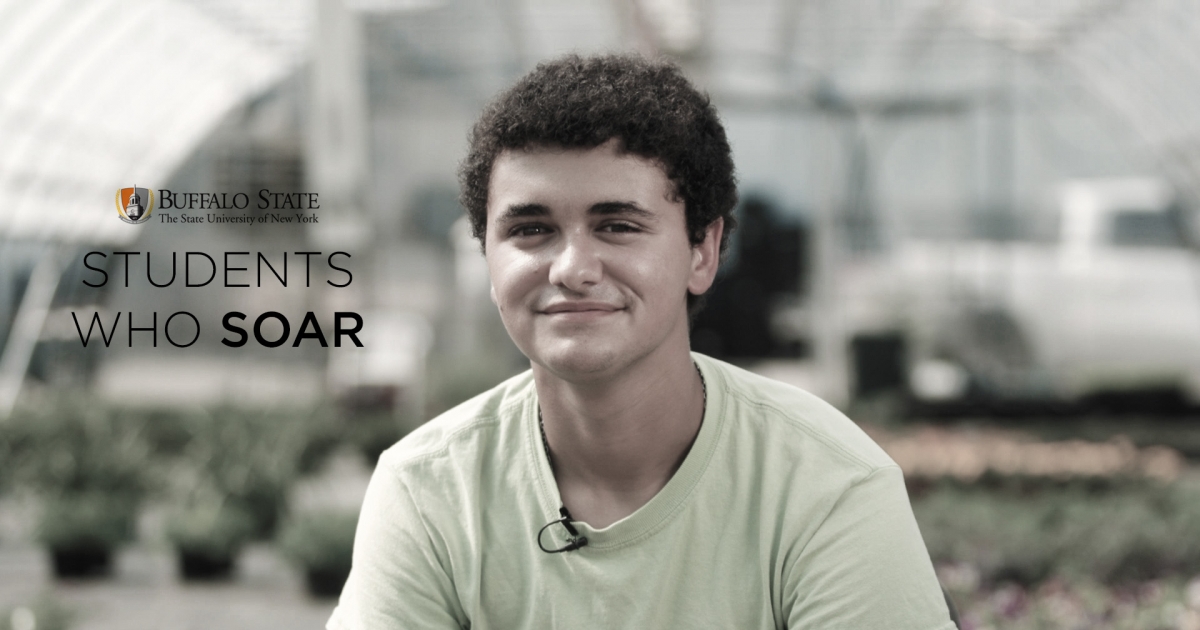 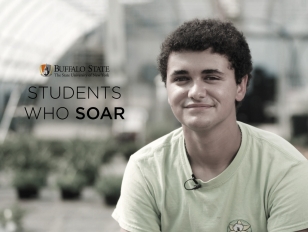