Since joining Buffalo State College’s Social Work Department in 2013, Karen Edmond,’99, has accumulated a host of accolades and high-profile appointments, including spots on the College Senate and the Professional Staff Caucus Executive Board. Last July, her influence reached the national level when she received a three-year appointment to the Field Directors Committee of the Council on Social Work Education (CSWE), the accrediting body for all social work education programs across the United States.

“I feel humbled and blessed,” said Edmond, who serves as her department’s director of field education and teaches the Field Practicum courses. With a master’s in social work from the University at Buffalo, she also possesses 30 years of clinical experience in a variety of roles, primarily working with children and families.

“It’s an honor for a group of people outside of SUNY to recognize the work that I’m able to do, respect me for the work I’ve done, and appreciate what I bring to the table from my years of practice,” she said.

While such roles and recognitions reflect her commitment to her work and fulfill professional goals she has set for herself, it’s something else that makes Edmond’s eyes light up—her students. Edmond not only wants to see them thrive in a field that requires a certain temperament, determination, and compassion; she also wants to help them find positions that best fit them individually, where they can make the most difference.

“I was determined when I came to Buffalo State that no matter how large the population of juniors was, I would meet individually with each one in the fall,” Edmond said. “I learn about their history, their current life, and why they want a social work career.”

“I was determined when I came to Buffalo State that no matter how large the population of juniors was, I would meet individually with each one in the fall. I learn about their history, their current life, and why they want a social work career.”

From there, she helps connect them with one of the many nonprofit and health-care organizations that offer internships—relationships Edmond has cultivated over the past eight years. There are now some 40 organizations where Buffalo State students are placed, including Gerard Place, Crisis Services, Adoption Star, Catholic Charities, and Horizon Health Services.

“When I started, I recognized that some field agencies had a need for interns but had never worked with them before,” Edmond said.  “I helped them to figure out their needs and find the right students for the internships.”

Her dedication begins before she even gets to campus, as she often gets up early to respond to student emails first thing.

“Usually, in the first semester of the Field Practicum, students have some uncertainty about what they will do the first couple of weeks in their agencies,” she said. “I address any concerns they have before they go into their field sites.”

In her classroom, Edmond passes along knowledge she’s garnered from her many social work positions, which have spanned from addiction treatment to teen pregnancy prevention.

Her passion for the field stems from a childhood witnessing despair firsthand. Growing up on Buffalo’s East Side in the 1980s, during the height of the crack epidemic, she saw kids disappear into gangs and parents of close friends fall into the grip of addiction. And, she said, she felt powerless.

“I watched my community change into something that didn’t look familiar anymore,” Edmond said. “I wanted to pursue a career that would help me fight the crack epidemic and its impact on children and families.”

She started by landing an internship with the Erie County Medical Center’s Children of Addicts and Alcoholics program in its downtown clinic while she was a student at Erie Community College. After transferring to Buffalo State, she continued helping this population by interning at Children’s Hospital, where she specifically handled intakes for infants born to women suffering from alcohol or drug addiction or who had been diagnosed with HIV or AIDS.

Several years later, she returned to Children’s through the community action organization Early Head Start as the coordinator of home-based services for medically affected children. She was assigned her own interns and had what she called “an awakening moment.”

“I often felt like a fish out of water,” Edmond said. “It was working with students that put me on the path of social work education, which I believe I was meant to do.”

She started teaching in 2004, and in 2008 was hired as the coordinator of field education at Niagara University. When she found a similar position at Buffalo State, she said it was akin to coming home.

“Buffalo State College is my heart,” she said. “This is the place that shaped who I am today.”

It’s also truly part of Edmond’s family. Her son, daughter, mother, and mother’s husband all earned either their bachelor’s or master’s degree from Buffalo State and found fulfilling careers as a result.

“This is not just a job for me,” she said. “It’s a passion to see how students can find their calling within this important profession.”

Photos by Bruce Fox, campus photographer.
Back to News 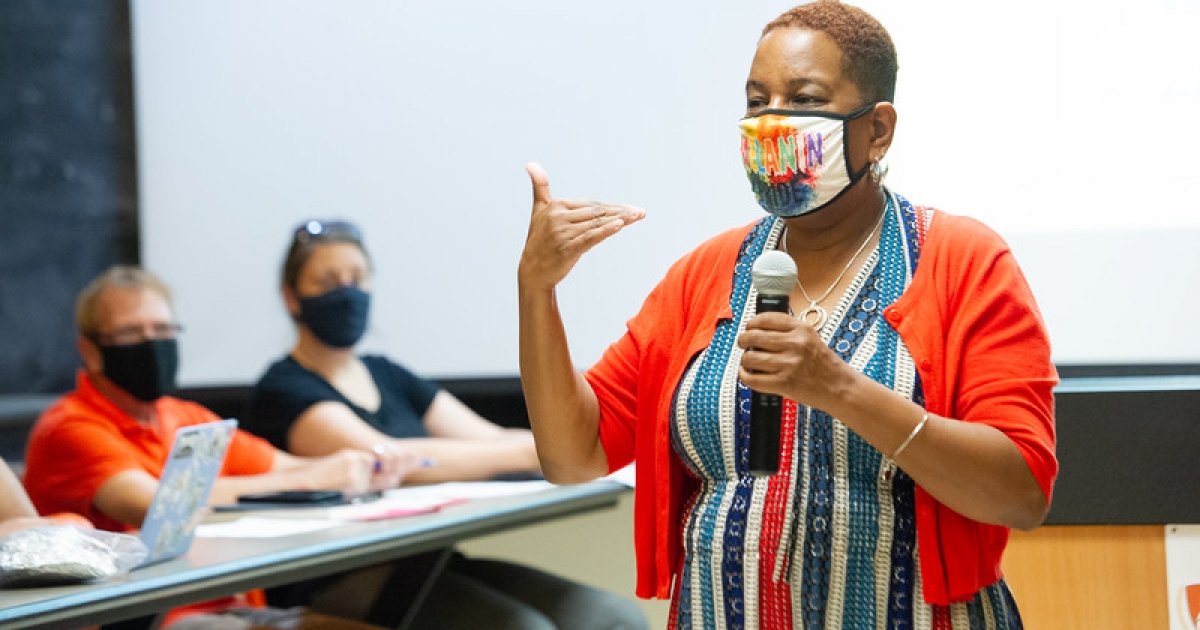 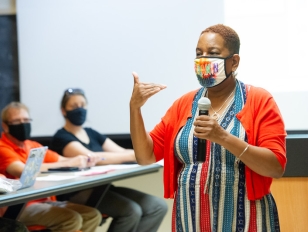