Erica Fire, costume director and shop manager for Buffalo State College’s Theater Department, started sewing as a young child, making outfits for her dolls. Even then, she recognized that clothes help tell a story. While attending Starpoint High School in Pendleton, New York, she taught herself how to alter store-bought clothes to make them unique.

“I tried to make things that weren’t out in the world,” said Fire, who joined Buffalo State in 2008. “That’s when I got a taste of what I do now. I didn’t know then that costume tech was a thing.”

Over the past 30 years, Fire has excelled in the “costume tech thing,” constructing myriad costumes for productions ranging from period dramas to fantastical performances at Buffalo State and for professional companies including the Glimmerglass Festival in Cooperstown, New York; the Shakespeare Theatre Company in Washington, D.C.; and Studio Arena Theatre in Buffalo (now Shea’s 710 Theatre).

At Buffalo State, Fire works closely with Ann Emo, professor and chair of theater, who designs the costumes for each production and whom Fire met while working in Buffalo theater.

“She’s the artist; I’m the engineer,” Fire explained. “The designer starts with the script and the director’s vision for the show. She then does research and makes a sketch. When I get the final drawing, I make it into something physical.”

“Fitting actors in a range of sizes and body types, I see the vast ways that standardized sizing fails. We need to make sure the costumes fit them, not the other way around.”

To accomplish this, Fire incorporates textual and creative skills with mathematical concepts. At Bennington College, where she earned her bachelor of arts, Fire combined two seemingly disparate interests—costume design and physics—into a double major.

“One of the cool things about a costume technician’s job is the physical ways in which we do math,” she said. “For instance, when constructing a skirt shape, we’re using pi to find the right radius.”

Along with her costume shop duties, which include altering existing pieces in the wardrobe, assisting with costume changes during productions, and keeping the outfits clean, Fire teaches a 1-credit practicum course each year and the 3-credit Costume Construction course every other year.

“I love interacting with students,” Fire said. “I like breaking down any perceived barriers to costume construction and helping students see that it isn’t scary, even if they have no prior sewing experience.”

In her professional work, Fire is especially proud of her ongoing involvement with Glimmerglass, a summer opera festival she joined in the late ’90s. The longest-running member of the costume shop, Fire has worked alongside Tony Award–winning costume designers and highly skilled technicians from around the country. The experience, she said, has taught her much about the physicality of costume design and different ways to be creative.

“I’ve observed that opera training sculpts bodies in specific ways, just as other physical training does,” she said. “Also, operas often cast female alto singers as men. It’s really fun to figure out how to structurally make a woman the sexy boy on stage, whether we actually use padding to build up shoulder width and arm muscles or make the outfit more androgynous. Opera is about voice, not the gender of the singer.”

Fire has also perfected how to tailor outfits to reflect individual performers.

“Fitting actors in a range of sizes and body types, I see the vast ways that standardized sizing fails,” she said. “Actors and actresses have told me, ‘This is the first time I’ve really loved how an outfit fits me.’”

The theater world is a fast-paced one with tight deadlines, including those imposed on the costume shop. Fire has learned to employ empathy while working quickly.

“You want to be kind to any actor who comes into your fitting room,” she said. “Everyone has at least one thing about their body they absolutely hate. You have to stop and think, ‘This is a person, not a problem to solve.’ We need to make sure the costumes fit them, not the other way around.”

One of her favorite Buffalo State plays to outfit was Intimate Apparel, performed in 2019, which focused on an African American seamstress at the beginning of twentieth century.

Fire also enjoyed the challenge of working on the dance performance Alternative Dimensions in 2012, where she created the costumes from illustrations created by Erté. A pseudonym for Romain de Tirtoff, Erté was an influential twentieth-century artist who permeated the fashion, art, theater, film, and interior design worlds at the time.

“For this performance, I built these fantastical dresses with hoops underneath to hold a flower shape,” Fire said. “It was a little outside of what I had done professionally and really fun. No matter how long I do this, eventually a director will pick a time period or a genre I’ve never worked on before. It keeps me growing and exploring.” 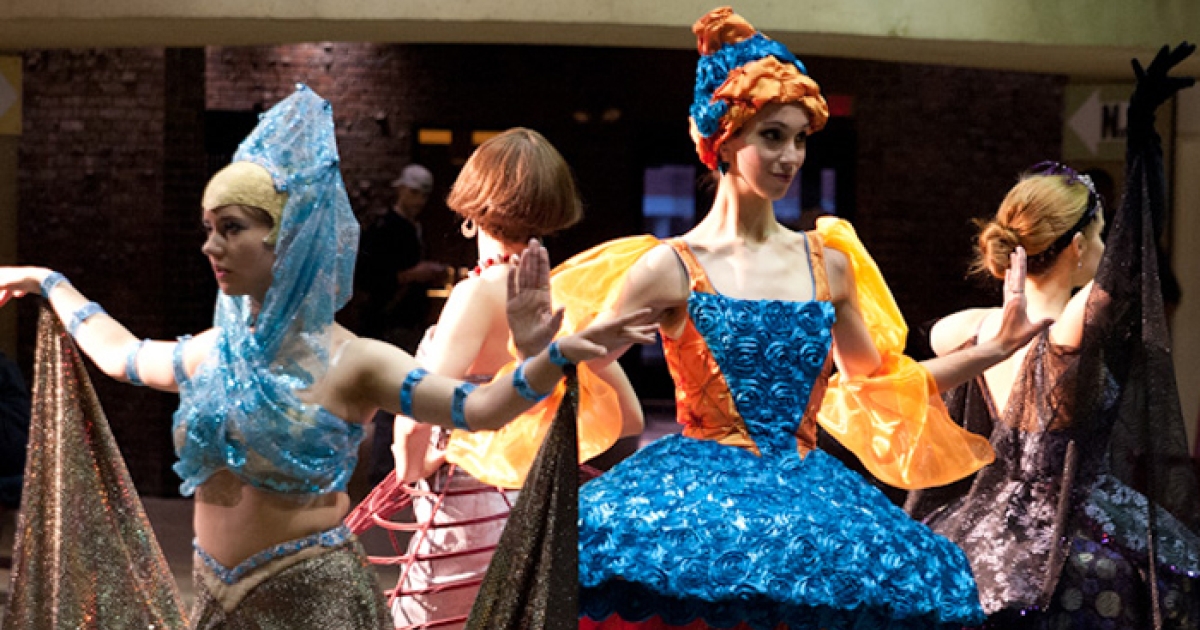 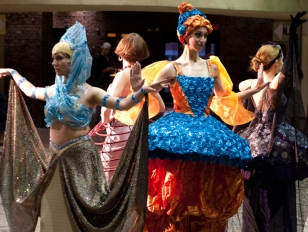