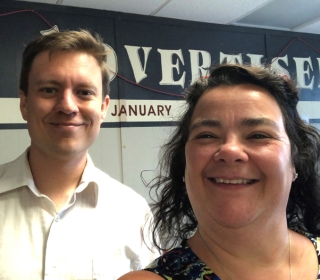 Because of an applied learning project that Jane Sullivan, Buffalo State College writing lecturer, decided to pursue last fall, at least 30 freshmen in 2019–2020 have been or will be published in the East Aurora Advertiser.

As a final project in College Writing Program (CWP) 101, Sullivan’s students interviewed East Aurora residents and wrote profiles for the “Spotlight” feature in the 148-year-old locally owned community newspaper where Sullivan serves as lifestyle editor. And she connected with a Buffalo State alumnus to make it happen; Adam Zaremski, a 2006 journalism graduate, is the newspaper’s editor.

“I started off having the students write essays about themselves, and then scaffolded the writing and interviewing techniques from there,” Sullivan said. “They interviewed a classmate to prepare them to interview a complete stranger for the project.”

Only a handful of the students are writing majors, Sullivan said.

“All seemed apprehensive at first about interviewing a stranger, but they felt confident enough to do it,” she said. “A couple of students wanted to interview someone together, and I let them.”

The subjects ranged from a female speed skater to a rock singer and guitarist.

So far, 10 of the profiles have been published and the others are waiting in the queue for Zaremski to use. Some of them can be accessed on Sullivan’s Facebook page.

The editor said he welcomed the students’ contributions.

“I always like when we can get high school or college students involved in the paper,” he said. “I like to have different voices represented.”

Zaremski, who wrote briefly for the Record while at Buffalo State, could tell that Sullivan prepared the students well and helped them understand the spotlights. The intent is not to highlight well-known politicians and business leaders, but rather to focus on regular residents who may have an interesting job, hobby, or volunteer position.

“They are people you don’t hear about as much,” Zaremski said. “Some are community members who have lived here for a while.”

Overall, he said, the articles were well-written and captured the subjects accurately.

“They got good quotes and seemed to care about the project,” he said.

Sullivan said she met with students individually after they turned in the features, talking about what went well and what needed further work.

Sullivan said she’d like to repeat this assignment in the future.

“If you’re an adjunct at Buffalo State, getting involved and engaging students in an applied learning program makes you feel connected,” she said. “It also was a great experience to see the kids’ faces light up when they saw their names in print and knowing they were doing something worthwhile and learning to communicate with the world around them.”

She added that 2019 ended up being one of her best years of teaching, “because the work went beyond the classroom.”