We’ve all heard about founding fathers—those men who established countries and companies, industries and institutions. Buffalo State College itself was led in its early days by the likes of Henry B. Buckham, James M. Cassety, Harry W. Rockwell, and other learned men whose names now adorn buildings across campus.

But did you know that Buffalo State also had its share of founding mothers? Women who were among the first in the country to earn doctoral degrees. Women who were trailblazers in the field of education. Women who were world travelers. Women who played a formative role in the history of this institution and in the lives of thousands of students. Women who held administrative positions at a time when men dominated these posts—despite the fact that nearly 75 percent of America’s teachers were female. Strong, bold women who were well ahead of their time.

As we prepare to celebrate Buffalo State’s sesquicentennial—marking 150 years since the college was founded—this is an ideal time to look back at a few of our female educational pioneers and how their legacy has opened opportunities for others at Buffalo State and beyond.

Gertrude Bacon was born in 1866 in Elma, New York. She graduated from the Buffalo Normal School in 1886, and then received her bachelor of science and master of arts degrees from the University of Buffalo, while also studying at Columbia University and the University of Chicago. After one semester teaching in the North Tonawanda schools, she joined the faculty of the Buffalo Normal School in 1887 and would remain there until her retirement in 1936.

She served as a seventh- and eighth-grade critic teacher before being promoted to principal of the School of Practice, and then to head critic and teacher of methods. Later, she was appointed superintendent of practice teaching and finally to full professor of elementary education and associate director of training.

Known as a strict and formal instructor, Bacon delighted students and colleagues when she purchased a Ford automobile, which she called her “pride and joy.” It is said that she humorously and graciously accepted the well- intended joshing of her associates, temporarily engaged a student chauffeur, and rode around town in style.

Upon her death in 1937, President Rockwell said: “Generations of Normal School and College students will always think of her as one who maintained with vigor and dignity the highest professional ideals. She kept abreast of the best in education, and thousands of teachers can testify to the value of her instruction and example. Her loyalty to her Alma Mater; her devotion to her friends; her gracious hospitality, will endure in the memory of all who were associated with her.”

During a Special Dedication Week in April 1963, one of the Elmwood campus’s four original buildings, built in 1928, was dedicated in Bacon’s name as a lasting testimony to her life of service to future teachers.

Catherine Reed was appointed Buffalo State’s first dean of women in 1926, a position she would hold until 1955. Her hiring was a progressive move at the time.

Known for her radiant smile and compassionate attitude, she was a favorite of students for generations. Each year, it seemed, grateful and admiring acolytes showered Reed with praise in the yearbook.

As she began her career, the 1927 Elms read: “To our dean, we waited eagerly for her coming and we now welcome her with open hearts. May she have all the health and happiness that she richly deserves!”

Years later, the 1944 Elms noted: “To Dean Reed we owe much of what we got out of our four years at State. Through her insistence that we assume responsibilities, we have become increasingly self-directing persons. We admire her for her magnificent ability at organization; we are grateful for her expert guidance and helpful advice.”

And in dedicating the 1955 Elms to Reed upon her retirement, the editors wrote: “Dean Reed, in her capacity as teacher and dean since 1926, has kept the doors of her office open with welcome to the countless students who have needed and received her counsel. Her eager eyes have been constantly looking for new ways in which she can counsel the student in adjusting his character, not only for college, but for his life. The traditions and services of the college which she has initiated, have always been promoted with this leadership development in mind. Her personality reflects the keen interest she has in others and the constant faith she has in students. Many are those who can testify to her readiness to lend a willing hand. To Miss Reed, who has dedicated so much of herself to us, we dedicate this.”

These words remind us of Reed’s legacy in higher education—teaching is a profession based on human relationships. Nothing can replace that.

Ruth Houston was the first female chair of a coeducational physical education department in the United States. That bears repeating in another way—Buffalo State was the first college in the country to employ a woman to chair a phys ed department for both male and female students.

Houston organized the Department of Physical Education at the Buffalo Normal School in fall 1917 and started its accompanying intercollegiate athletics program. Before that year, some female students at the college had participated in basketball and tennis sponsored by other local schools’ organizations.

During the 1920s, Houston and an advisory board of three faculty members oversaw 12 teams in various sports, including basketball, baseball, tennis, and swimming, that competed under the college’s name.

Houston continued to expand the athletics program. Under the new constitution of the college’s Athletic Association, which was adopted in 1931–1932, sports were arranged on a seasonal basis, and archery was added to the campus activities. A new athletic field was prepared for soccer practice and competition the following year. In the ensuing years, other Play Days were held, and additional athletic contests and tournaments were conducted.

Credit for the steady progress of Buffalo State’s women’s athletic program in its early decades is due to Houston, who efficiently guided and directed the program with the help of a small group of associates.

Buffalo State’s Houston Gymnasium bears her name to this day, as does the annual award given to the college’s outstanding female athlete for career accomplishments. Houston was inducted into the Buffalo State Athletics Hall of Fame in 1985.

In her 37 years at Buffalo State, Katheryne Thomas Whittemore rose to full professor, served as chair of the Geography Department, and, in 1957, was appointed to the newly created post of director of the Division of Arts and Sciences, which oversaw all academic departments at the college. But her academic pursuits outside of campus may have been even more fascinating.

Born in 1899 in Nebraska, Whittemore earned a bachelor of arts from Vassar College in 1921. After graduation, she embarked on an around-the-world trip, where she taught English in Fairbanks, Alaska; Tokyo, Japan; and Manila, Philippines.

When she returned from her travels, she enrolled in Clark University in Massachusetts, earning her master of arts in geography in 1925 and her doctorate in 1936. She joined the staff of the State Normal and Training School as an instructor of geography in 1925.

In 1933, she married Charles Wyman Whittemore.

Even while teaching, Whittemore continued to travel the world. She took an extended trip to Africa in 1957, traveling 1,000 miles by riverboat on the Congo River to visit agricultural experiment stations and reforestation projects. In 1960, she went to Stockholm, Sweden, for meetings of the International Geophysical Union, adding a side trip to Finland. She wrote extensively in her field on the United States and Canada. One of her textbooks, The United States and Canada, was selected for exhibit at the Brussels World’s Fair. She wrote and presented the Learn and Live television series for WBEN in Buffalo. She also served as president of the National Council for Geographic Education, an organization that rapidly expanded its membership and programming under her direction.

When Whittemore died in 1981, a colleague summed up her life: “A real patrician lady—dignified, always courteous—gentle but firm, a backbone of steel, and devoted to truth and justice.”

She accepted a teaching position at Howard University in Washington, D.C., and met her future husband, Robert Burrell. In 1945, she enrolled in the doctoral program in psychology and human relations at New York University.

In 1948, the Burrells moved to Buffalo. Robert accepted a position as an attorney in the Buffalo District Attorney’s Office and later became a City Court judge. Anna was the first African American faculty member to be hired by Buffalo State.

Burrell’s interest in child development, human relations, and international education led her to the country of India. In 1959, she was awarded a Fulbright Fellowship to study at Jabalpur University. This was followed by an appointment to the post of director of the India Project at Buffalo State, which resulted in several trips with students, in 1968–1969 and 1970–1971, to study the educational system and culture of that country. She was also the college’s director of human relations workshops and lectured throughout the United States on labor, children, and discrimination. She retired from the college in 1972 and died in 1981. 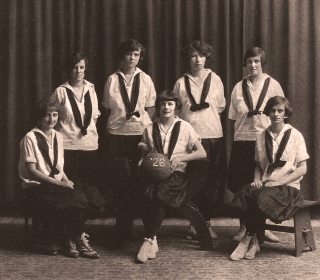 Read about more of Buffalo State’s Founding Mothers in the Summer 2021 issue of 1300 Elmwood.

Information in this article comes from These Were Builders (1973) by Sister Martin Joseph Jones. In 1969, Jones came to Buffalo State as a reference librarian and later worked as an assistant in the Periodical Department. In 1975, she became the college’s first archivist. Jones retired in 1995. She died in 2013. 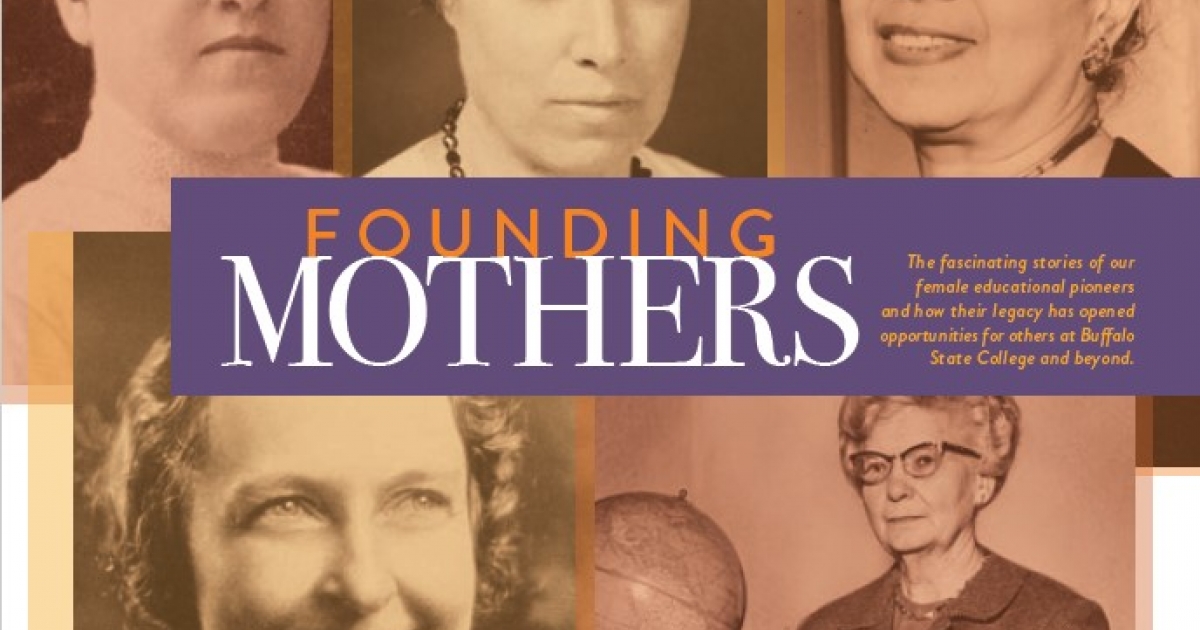 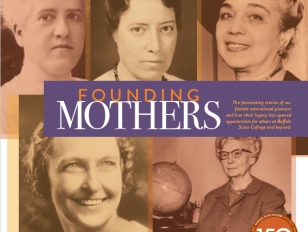