While the Buffalo State College campus is replete with public art and sculptures, one in particular pays homage to the dignity of labor and the workers who keep Buffalo State running behind the scenes.

Completed in 2008 and dedicated in 2009, the Arc de Boot sculpture outside the Clinton Center is a 9-by-11-foot structure meant to resemble the Arc de Triomphe in Paris. Its two columns consist of cast-iron molds of boots from campus Facilities workers. The arch is topped with copper and straddles the pathway to the Clinton Center, which houses many of Facilities’ operations and services, including Construction and Maintenance, Operations and Business Services, Grounds and Custodial, and Environmental Health and Safety.

“It was an honor to create this sculpture,” said William Hoffman, ’05, the sculpture’s artist, who is now the director of conservation at the Mariners’ Museum and Park in Newport News, Virginia. “It’s meant to be a tribute to the workers and give them a distinction, a voice. It’s easy to think about professors and administrators when you think of a college. But without the plumbers, cleaning staff, electricians, groundskeepers, maintenance staff, and so forth, it wouldn’t run.”

Terry Harding, former director of Campus Services (now Facilities Construction and Maintenance), who retired in 2017, came up with the idea for the sculpture in 1999, when employees’ old boots were starting to accumulate in his office.

“We provide steel-toed boots to those who work with heavy cargo,” Harding said at the time the sculpture was dedicated in 2009. “Employees are reimbursed for new steel-toed boots as long as they bring in a receipt of purchase and turn in their old boots. I began to look at them more as symbols of the individuals’ work lives and pondered about some way to put them to use aesthetically.” 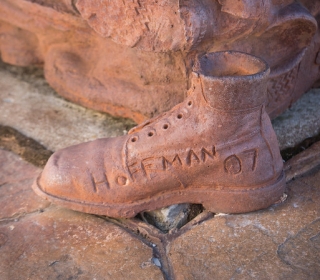 Harding had a good relationship with Kenneth Payne, professor and sculptor in the Art and Design Department, and the two began to discuss the idea for the sculpture in 2006. Harding was familiar with the work Payne’s students did, and the Arc de Boot started to take shape.

“Together we came up with a plan to create the sculpture for campus,” Payne said. “A budget was arrived at, and a great majority of the budget relied on material donations.”

“I selected a student who I thought would have the knowledge and vision to carry it off,” he said.

Creating the sculpture took nearly two years, using liquid rubber, casting wax, sand, and a special resin. Hoffman made over 20 unique casts from workers’ old boots, using the casts to make hundreds of iron boots. He then welded them into two 2-by-2 columns. A “test boot” with Hoffman’s signature sits just a few inches from the base. The arch is made up almost entirely of scrap metal from old iron radiators.

While Hoffman was the main creator of the sculpture, the work was a team effort, Payne said.

“Although Will was the sculptor for the project, most of the advanced students at Buffalo State at that time pitched in to help with the mold making and the casting,” he said. “It was an enormous project for a student to take on, but many other sculpture students pitched in to ram the many tons of sand it would take to mold the project and to be the crew for the casting of so much iron.”

Harding was proud of the result of his vision when it was unveiled in 2009.

“This is a visual testament to what we do,” he said. 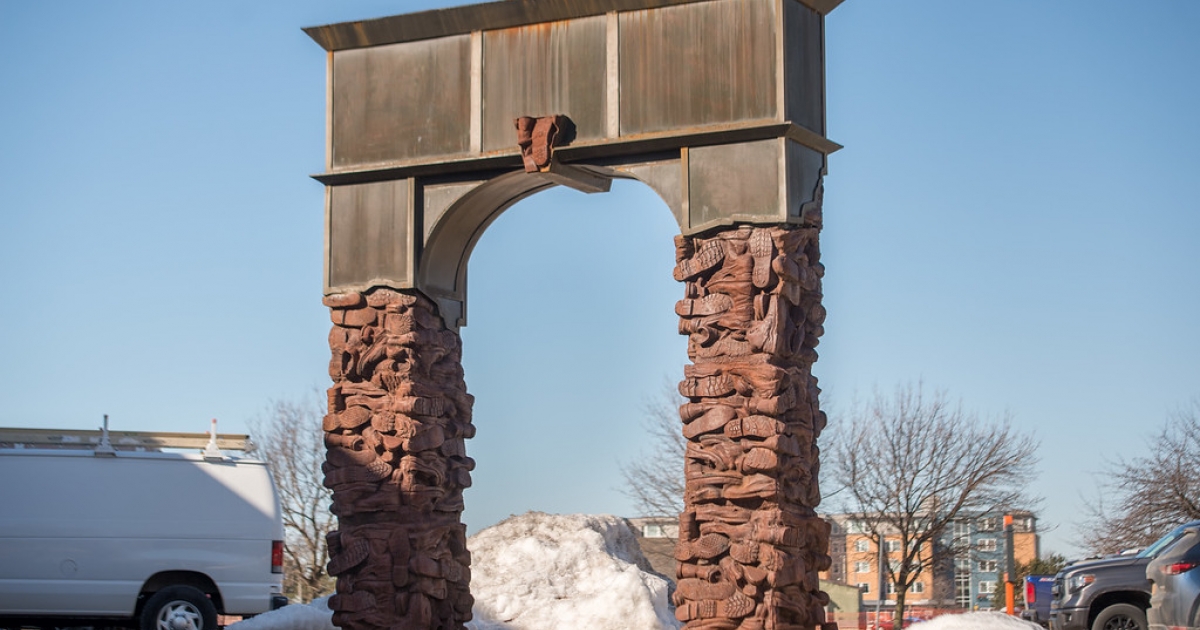 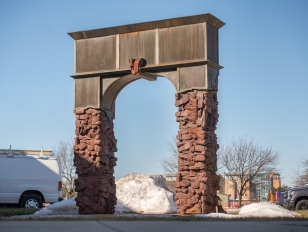