Buffalo State College journalism and media production majors who aim to write, shoot, produce, and direct television news and public affairs programs have the opportunity to do so before they graduate.

Last spring, through a partnership with the Buffalo Broadcasters Association (BBA), the Communication Department launched the TV series Broadcasting Buffalo, which aired on Saturday evenings in March and April 2021 on WNYO-TV (MyTV Buffalo).

The show was the brainchild of BBA Vice President Stephen Monaco, who approached Deborah Silverman, associate professor and chair of Buffalo State’s Communication Department, with the idea.

“The BBA has always wanted to partner with an educational institution to help students aspiring to pursue careers in journalism and media production, but we weren’t sure how exactly or with whom,” Monaco said. “When I became vice president, we revisited the idea and quickly realized Buffalo State was the school we wanted to work with. The Communication Department has incredible full-time professors and lecturers, many of whom are industry veterans.”

COM 429 students in the control room.

The initiative was so successful it has continued this spring. Students in the same two courses are producing 11 episodes, focusing on topics such as Buffalo’s rebirth, the first 50 years of broadcasting in Western New York, and Ukraine.

“The students are doing a fabulous job scheduling the guests and conducting the interviews,” Notarius said. “We’re really proud of how they’ve jumped right into this opportunity and made the most of it.”

Episodes can be viewed on the Broadcasting Buffalo website.

Originally planned for spring 2020, the show was put on hold after the coronavirus pandemic gripped the globe. And last spring, the students took many precautions, Monaco noted.

While practicing social distancing, the 24 students in the combined classes were able to produce 10 original episodes in the Savage Theater and Communication Building’s TV studio.

They learned how to do everything, from running cameras to creating questions for the guests to directing the shows. Each week, students assumed different roles so that they could learn the various aspects of running a “live” show (prerecorded but shot in one take) in the fast-paced, often hectic environment of broadcasting.

Students hosted such timely guests as Penny Wolfgang, retired New York State Supreme Court justice; Robby Dinero, owner of the Athletes Unleashed gym, who made headlines for defying the state’s Orange Zone guidance for COVID; and Steven Cohen, an attorney who represented more than 70 local restaurants challenging the state’s dine-in ban in January 2021. The final guest for the semester was Buffalo State President Katherine Conway-Turner, who discussed the challenges the coronavirus pandemic created for higher education.

“The group of students we had was really good,” Karnath said. “They came to class, fulfilled their roles, and asked good questions.”

Silverman, who got her start as a volunteer at a radio station in high school, noted the boon Broadcasting Buffalo is to journalism and media production majors.

“It provides them with a unique and tremendously valuable opportunity to work together on the production of a news–public affairs program, just as they would in the real world of television,” she said. “Since many of our graduates go on to careers in television, either in front of or behind the camera, opportunities like this one give them a competitive edge in the job market when they graduate.”

About a dozen BBA members, all experienced broadcast professionals, volunteer their time by serving as anchors and sharing their professional knowledge with the students.

“While it’s not unusual for colleges to work with campus TV or radio stations, a show like this is one of a kind,” Monaco said. “We’ve been able to pull the best from a variety of TV and radio stations to work directly with the students.”

In addition, the BBA provided the Communication Department with $5,000 in wireless microphones to use for the show.

“BBA has been a fantastic partner,” Silverman said.

Karnath pointed to the learning curve the show provides students over the semester.

“My students would tape the shows on Monday and critique them on Wednesday, so we could see how we did, and then start planning for the next week’s show,” Karnath said. “Students had to juggle a lot of balls at the same time and get a taste of what happens in the real world of broadcasting.”

Both courses are designated as service learning, and the Buffalo State Civic and Community Engagement Office awarded the BBA its 2021 Reciprocal Partnership Award, demonstrating the principles of reciprocal, collaborative, and mutually beneficial partnerships, Silverman said. Likewise, the BBA recognized Buffalo State for its partnership on Broadcasting Buffalo at its Hall of Fame dinner in fall 2021.

“It’s been an honor to work on this project,” Monaco said. “I’m looking forward to what students will be able to do in future productions.” 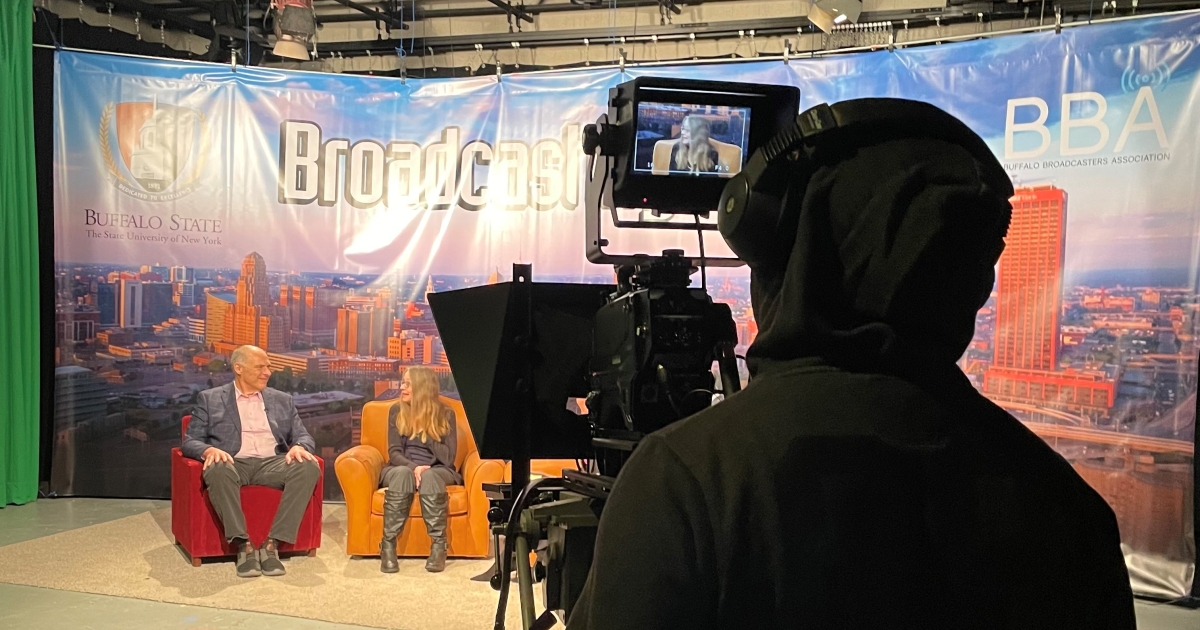 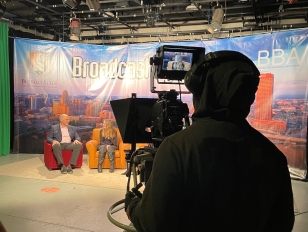