Many students aspiring to break into broadcast journalism must wait until after graduation to get their big shot, but in Buffalo State College’s Communication Department, that opportunity has been built right into the curriculum.

Broadcasting Buffalo, a new TV series produced by students in Ellen Notarius’s COM 337: Electronic News Producing class and Erick Karnath’s COM 429: Advanced Multi-Camera Studio Production class, will tackle some of the most relevant topics in news each week. Turning a local lens on national headlines, the show will premiere on Saturday, March 27, at 6:30 p.m. on WNYO-TV (MyTV Buffalo, virtual channel 49) and will run for 20 weeks: 10 original episodes plus repeats. Each airing will include commercials for Buffalo State College.

The concept for Broadcasting Buffalo has been in the works for nearly two years, since Stephen Monaco of the Buffalo Broadcasters Association approached the Communication Department with a proposal for a partnership between the BBA and students aspiring to careers in journalism and media production.

For students, taking on different weekly responsibilities, combined with the airing of their finished product on broadcast television, serves as a unique opportunity and the ultimate résumé builder.

The idea came to fruition in spring 2020, when students began putting packages together for the eight-episode series that would be hosted by former CNN national correspondent Susan Candiotti; however, the show’s momentum faltered after the COVID-19 pandemic quickly peaked, forcing Buffalo State and other campuses to switch to fully remote instruction.

“The students did the packages, and they did an incredible job, but they did it all from home,” Notarius said. “So it was really disappointing, because we never got to air anything.”

A year later, with social distancing and safety protocols in place, Broadcasting Buffalo is finally getting off the ground. Both Notarius and Karnath agree that students have been adapting well to the changes.

“The students have been very receptive to anything that we’ve asked them to do,” Karnath said. “They’re really enjoying the in-person teaching.”

In fact, having the students physically present for the show’s assembly has allowed them to come face to face with some notable guests, including Robby Dinero, owner of the Orchard Park gym Athletes Unleashed, who made headlines last November for holding a gathering in defiance of New York State’s Orange Zone guidance; retired State Supreme Court Justice Penny Wolfgang; and Steven Cohen, the attorney with the law firm HoganWillig who represented over 70 local restaurant owners challenging the state’s dine-in ban in January.

Rather than faculty members assigning each student a role for the semester, students are allowed to explore different avenues to gain experience in diverse positions in mass communication. Each week, students take alternate roles in running the newsroom, from pitching stories, reporting, and finding guests to participate in moderated discussions to shooting footage, editing packages, and serving as floor manager. Both the successes and mishaps of running a “live” show (prerecorded but shot in one take) prepare students for the fast-paced and unpredictable newsroom environment.

“The first week, we had a mic problem during the show,” Karnath said. “We didn’t have our music and our graphics package because they were being developed. The students got a taste of a live production; it’s a hands-on experience.”

For students, taking on different weekly responsibilities, combined with the airing of their finished product on broadcast television, serves as a unique opportunity and the ultimate résumé builder.

“It’s invaluable to be able to put that on your résumé tape and say, ‘This aired.’ ‘I wrote this blog.’ ‘I did this interview,’” Notarius said. “I think it’ll be very impressive to prospective employers.” 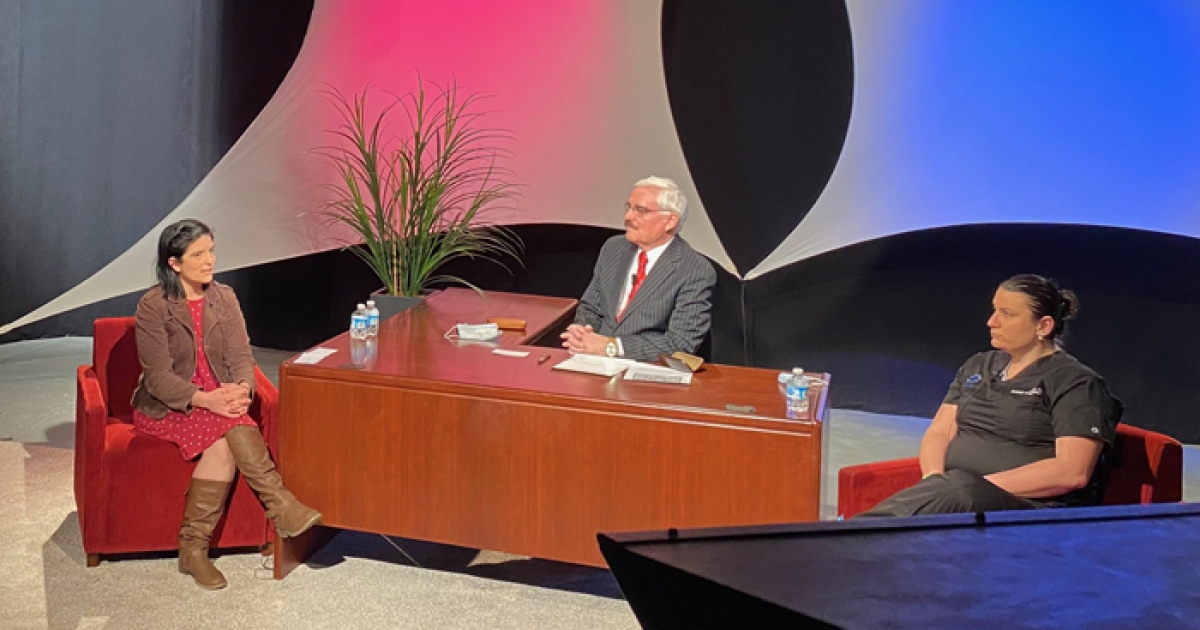 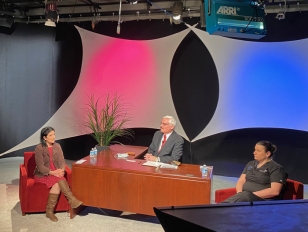