At a time when theaters across the globe have gone dark because of the coronavirus pandemic, one troupe, Casting Hall Productions at Buffalo State College, has found a way for the show to—safely—go on.

A group of 15 student actors and 14 crew members, under the direction of assistant professor of theater Jonathan Seinen, are virtually presenting Mother C, a dystopian tale written by Ansley Valentine. It is an adaptation of the twentieth-century classic Mother Courage and Her Children.

Viewers can see the livestreamed play December 3–5 at 7:00 p.m. Tickets, which are free for Buffalo State students and $5 for the general public, can be reserved online.

Ann Emo, professor and chair of the Theater Department, said they wanted to give students a safe way to perform this semester. She first considered a radio play, but many of the livestream options had logistical challenges.

“I started looking for new plays where I could pay the playwright directly for the rights,” Emo said.  “Serendipitously, I discovered this new play by Ansley Valentine [actor, director, playwright, and educator now living in Ohio]. He and I worked together at Studio Arena Theatre in Buffalo and reconnected recently on an online teaching platform.”

Written in 1939 by the German dramatist and poet Bertolt Brecht, Mother Courage and Her Children is a chronicle play of the Thirty Years’ War and reflects the playwright’s opposition to Nazism taking over Europe in the 1930s. The 90-minute Mother C focuses on a businesswoman and her children trying to make a living as civil unrest unfurls across the country in modern times.

“It’s amazing what you are able to capture in a Zoom performance. You can still feel the actors connecting with each other and telling a compelling story.”

“Mother C is incredibly timely,” Seinen said. “It speaks to the here and now of 2020 America. The Black Lives Matter movement that swept the country following the deaths of George Floyd and Breonna Taylor, and how peaceful protests met resistance from police and the National Guard, make the urban unrest that Valentine presents in his play feel closer than ever.

“The play poses the questions: Who do we become in these times? What values are we going to practice and pass on to the next generation? Mother C is a warning that in times of conflict and division brought on by systemic oppression, recognizing our interconnectedness is a necessary step toward healing and change.”

To create a safe environment for rehearsals that began in September, the Theater Department created booths in Warren Enters Theatre to separate the students and recorded the action via webcam. This alternated with rehearsals and filming over Zoom. Last week, the department decided to move all filming to Zoom, with students performing in their homes, in response to escalating coronavirus cases across the region and country.

“We followed our intention to put safety first in all we do,” Seinen said, adding that the in-person rehearsals helped students connect with one another and enhance their remote performances.

“It’s amazing what you are able to capture in a Zoom performance,” he said. “You can still feel the actors connecting with each other and telling a compelling story.”

Buffalo State alumni also contributed to the play as an American Sign Language coach for the one character who is hearing impaired and with video and sound production.

“It’s a unique way of presenting a play,” Seinen said, “and certainly new for me.”

It also marks the first virtual play for the department.

“We have first-year students through seniors participating,” Emo said. “I think they’re all excited about working on a new play.”

Meanwhile, some theater courses have shifted completely online; others have allowed students to meet in small groups.

For instance, 10 students taking Stage Combat II, with lecturer Adriano Gatto, a professional actor and fight director and choreographer, have practiced their craft in person every Friday in the Flexible Theatre in the Savage Theater and Communication Building.

“It’s a reasonably large space where the air circulates frequently,” Gatto said. “Plus, its floor-to-ceiling windows open, and that has resulted in a massive cross breeze.”

Wearing masks and working in small groups, the students simulate fights with 36-inch-long polypropylene training swords they purchased for less than the cost of a textbook, Gatto said.

“The swords can be easily cleaned with disinfecting wipes,” he said. “And they won’t be shared.”

Gatto complimented both the Theater Department for its support, such as in mapping out the floor to ensure that students stay at least six feet apart, and the students for their adherence to safety guidelines.

“Although we’ve lost our ability to practice some of the partner work we’ve done in the past, students have responded well,” he said.

Students have focused more on the solo fundamentals of stage fighting and worked with stacked cubes for targeting exercise in some sessions.

“It has allowed them to take ownership of the material and develop a greater self-awareness with the stage combat techniques,” he said. “If anything, COVID-19 has forced us as an industry to get ​more creative on how we communicate.”

“Our department is making the best of the situation and finding new ways to do our art,” Emo said. “We still can’t wait for the day when we can get back into the room together. As actors, we express human conditions, and as humans we just want to be with each other.” 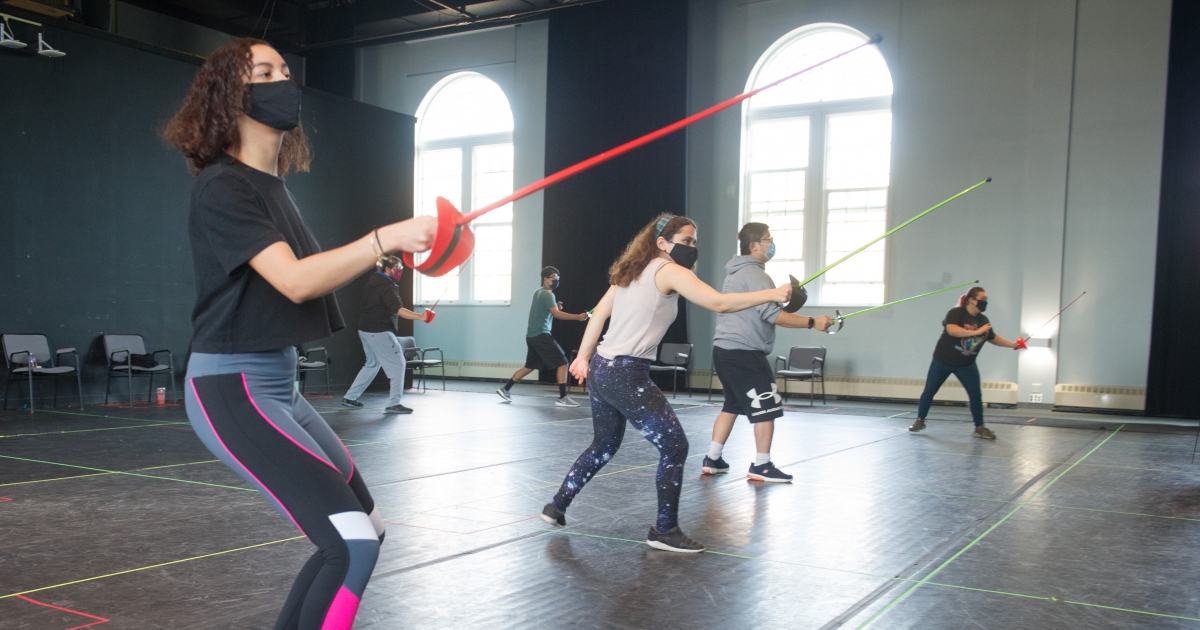 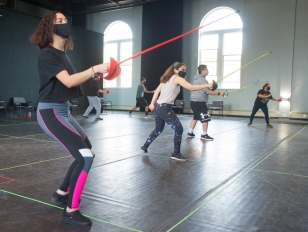