“I’m sure any passerby would have thought there was a zoo in the classroom,” Malejs, a lecturer in the Theater Department, said with a smile. But those two classes were tinged with sadness, as Malejs knew the college was about to transition to remote learning in response to the coronavirus pandemic. No one completely grasped at the time, however, how quickly their world would go as dark as any stage between acts.

Her students, who range from freshmen to seniors, have not let the current situation prevent them from honing their craft or learning new skills.

In many ways, they’ve flourished, she said. In an assignment to write a paper identifying actors’ use of the voice and body as seen in a play and a movie based on a play, her students were “thoughtful in their responses and engaged.”

Student engagement and adjustment has been evident throughout the Theater Department during this time of remote instruction, noted associate professor and department chair Ann Emo.

“The current format has allowed students to shine in unforeseen ways,” Emo said.

Darryl Heusinger, a lecturer who teaches Musical Theater I, has urged his students, both through online live discussions and written reflections, to explore the challenges and solutions to working in a restricted environment.

“While much of the dialogue has been focused on the challenges,” Heusinger said, “I’ve had the students write reflections on how these limitations might actually be helping their process with the not-as-often addressed concepts of containment, stillness, silence, and focus.”

He said one student in particular has benefited from this kind of reflection. In the first half of the semester, Heusinger said, this student was not particularly invested in the work, arrived late to class, and seemed disengaged.

“After we came back from spring break [and began remote learning] on March 30, he expressed to me how this period of physical isolation has allowed him the time to reflect on his life goals and how his previous behavior wasn’t fair to me, his classmates, but most of all, himself,” Heusinger said. “He has since reinvested himself in the process and is participating enthusiastically in class discussions, both live and on Blackboard, turns in his assignments before they’re due, and seems to be happier in general.”

Likewise, students in lecturer Melissa VanOsch’s Dance for Musical Theater course have smiled and laughed, despite weeks of isolation.

“We’re fortunate to live in a time where this amazing Zoom technology allows me to be alongside my students inside their homes, as far away as Japan,” VanOsch said. “Our weekly meeting time has not only become one in which we work on our stretching, strengthening, and developing dance techniques, but also a time to connect and share our weekly triumphs and disappointments.”

One of her students, Corey Gorski, said, “I love having something to look forward to each week. Having class connects me with my peers, and it’s a good reminder that we can keep moving forward together.”

VanOsch recently assigned improvisational dance as a vehicle for students to express their feelings of the current reality.

“I’ve been deeply moved witnessing expressions of entrapment, hope, fear, bravery, and the joy that dancing and performance brings,” VanOsch said. “It’s art at its finest.”

Heusinger said what he’s seen in recent weeks reflects what he repeatedly stresses to his students.

“This is what we do as artists,” he said. “We take the present challenges and ambiguities of the world and we transform them into fodder for our art—something useful, creative, and healing.”

Malejs’s students will perform poems or monologues for the entire class over Zoom on Thursday, May 7. She’s expecting a strong final product.

“This is one of the best classes I’ve ever had,” she said. “They show up. They journal. Their monologues are in really good shape,” she said. “But more than anything, they’re supportive of each other and very invested.”

Acting, she noted, requires human-to-human contact, and having to move to a remote platform has not been easy.

“This transition is not ideal,” she said. “I’m doing my best. I hope my students have gotten as much out of it as I have. I couldn’t be prouder of them, and seeing them has brought me tremendous joy.”

Pictured: Aleks Malejs’s Voice and Movement students gather in their last class before the switch to remote learning. 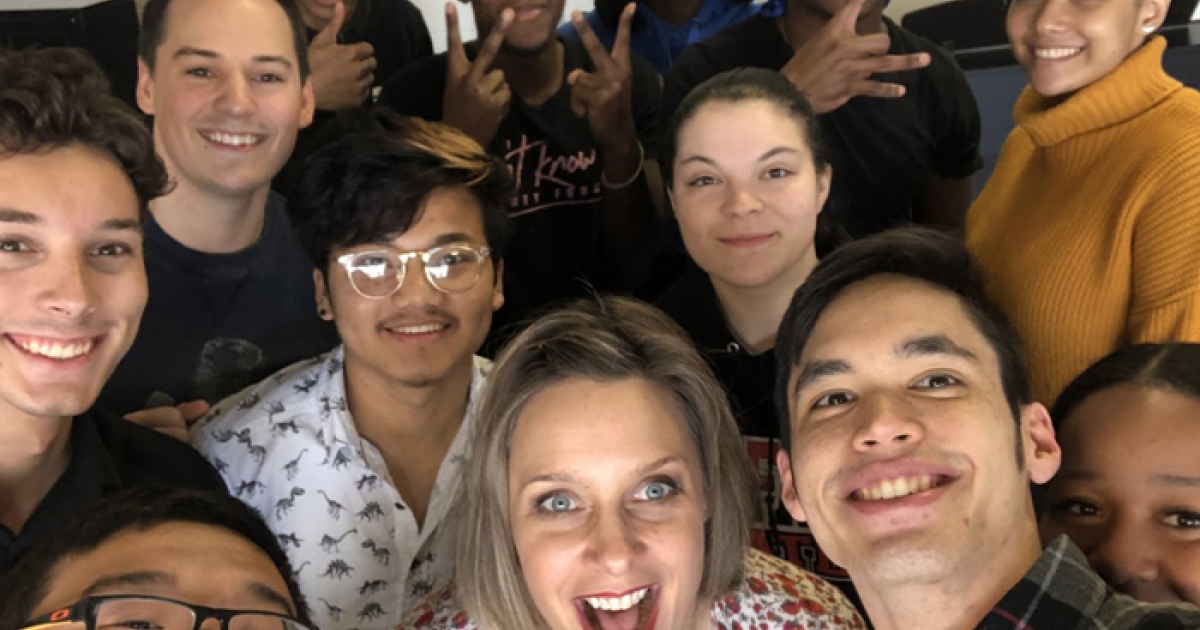 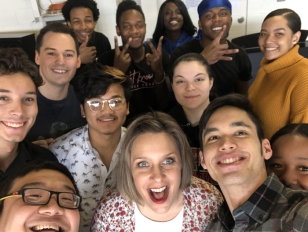