After 70 years, Buffalo State College has a new alma mater. Dawn Pustelnik, audience services manager for the Performing Arts Center at Rockwell Hall, penned the winning lyrics in the alma mater competition and was recognized at the college’s sesquicentennial kickoff celebration—Buffalo State College Day—on September 17. The new song, “Bengal Pride,” performed by Victoria J. Furby, associate professor and chair of the Music Department, and students from the Buffalo State College Chamber Choir, made its debut at the event.

“I was delighted to hear that I won the contest,” Pustelnik said. “Dr. Furby’s students are extremely talented, so it was wonderful to hear them sing the words for the first time at Buffalo State Day. I look forward to hearing it at future events.”

The previous alma mater, “Our Finest Hour,” was written by L. Harry Ray and was first published in the Elms yearbook in 1951, Ray’s graduating class year. His version was reintroduced to campus in 1993, when the college held its Commencement ceremonies on campus—in the newly built Sports Arena—for the first time in 23 years. By the time Buffalo State held its quasquicentennial celebration three years later, during the 1996–1997 academic year, “Our Finest Hour” had become a cherished campus tradition.

However, some students found Ray’s version to be a bit somber, Pustelnik said.

“I wanted to write something positive and uplifting. I wanted to address what it means to be a Bengal—caring, service, leadership, unity.”

“Working in the Performing Arts Center, I have the opportunity to hear the alma mater performed a few times a year,” she said. “I knew that the students found the words to be a little bleak, so I wanted to write something that was more positive and uplifting. Knowing that students are the ones singing the words, I also wanted to write it from their perspective.”

The competition opened in November 2020, challenging members of the campus community to create new or updated lyrics for the Buffalo State Alma Mater tune, in conjunction with the 150th anniversary of the college. Eighteen entries were submitted before the contest closed in February. The Alma Mater Committee, composed of five faculty members and administrators, chose the top three versions and sent them on to President Katherine Conway-Turner and her cabinet, who selected the winner.

Furby, who served as chair of the Alma Mater Committee, said each member reviewed the contestants’ submissions independently. The committee was looking for several specifics in the lyrics.

“The criteria by which the evaluation was made were tone—Did it have a tone that aligns with the mission and values of Buffalo State?” Furby said—“and poetry—Did the poetry make sense, and contain good writing and alignment to the music? Each committee member selected their top three submissions, and all these submissions were discussed. Dawn’s submission was selected as best matching the mission of the college.”

In writing “Bengal Pride,” Pustelnik said, she first tried to brainstorm some common themes on what it means to be a part of the Buffalo State community. From there, she worked on the song over the course of several weeks, taking breaks when she would get stuck.

“The first line came immediately,” she said, noting that she would watch the previous version on YouTube, just to make sure the words fit the music. “I also knew that I wanted to incorporate this idea of being a Bengal. The president refers to the Buffalo State community as fellow Bengals, so I wanted to address what it means to be a Bengal—caring, service, leadership, unity. I just worked on it one line at a time.”

The winning entry garnered a cash award of $2,500, and Pustelnik is putting most of the prize money right back into campus.

“I felt it was important to use some of the prize money to support causes on campus I feel are important,” she said. “So, the Music Department Scholarship Fund and the Buffalo State [Maud Gordon Holmes] Arboretum also benefited from my win. The arboretum will use the funds to plant trees on campus during Big Dig III, planned for November 6. In honor of Buffalo State’s 150th anniversary, I hope that others will contribute to the effort to plant more trees on campus.”

Buff State you taught us to believe,
Be inspired and achieve.
With great minds and caring hearts
We’re here to lead and serve.

With hope anew we’ll venture forth,
It’s with one voice we proudly roar
We are Bengals to the core.

In years to come, we’ll reminisce,
Filled with joy for times gone by.
We’ll not fail you Alma Mater,
Change the world for good.

Though we must leave our Elmwood home,
In our hearts for ever more
We are Bengals to the core. 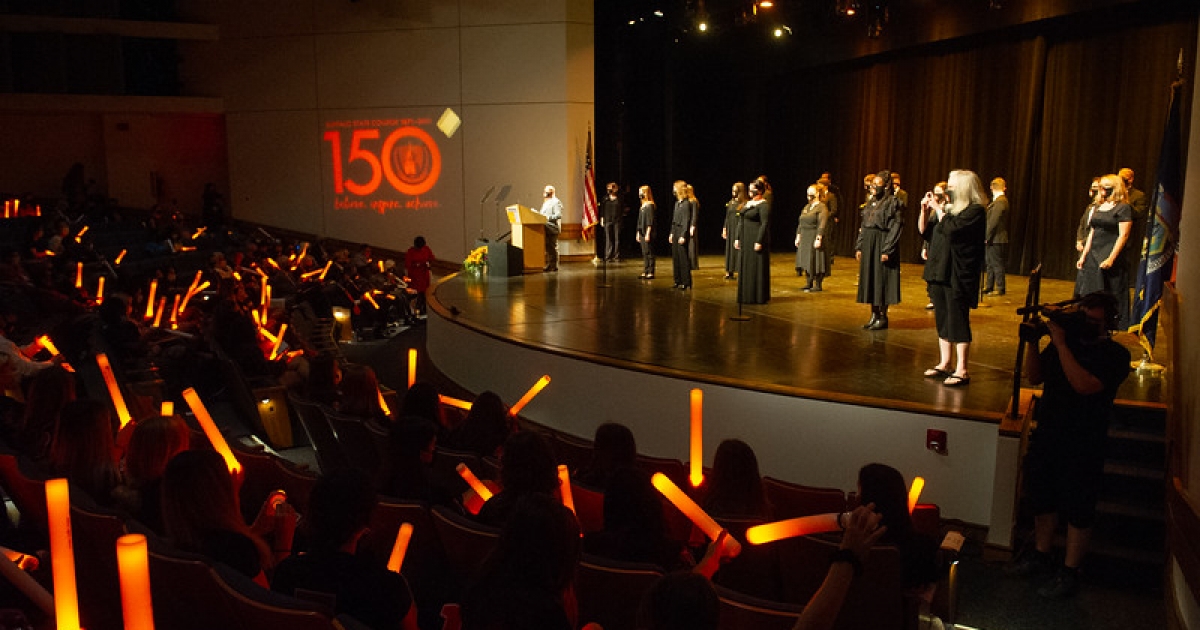 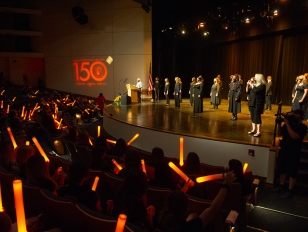