Lloyd, the 12-year-old terminally ill pit bull that the Niagara County SPCA took into its care July 5, has captured the hearts of Western New Yorkers this summer while knocking items off his “bucket list”—visiting the Niagara Aquarium, swimming in Lake Erie, and receiving a “Lloyd Day” proclamation from the Niagara County Legislature.

Lloyd got a taste of a college campus on Tuesday with a morning visit to Buffalo State College. Paula Madrigal, assistant director of prevention and health promotion with the Weigel Health Center, arranged the visit for Lloyd, who has advanced-stage kidney failure but is still mobile, and created a full agenda for the pup.

Accompanied by Liz Marshall, director of events and marketing with the SPCA, Lloyd started his day at Barnes & Noble in the Campbell Student Union, where he lapped up a specially prepared “pupachino” from Starbucks and visited with Sarah Young, dean of students; Benji, the college’s mascot; staff members, some with young children in tow; and invited local journalists.

Next, Lloyd trotted over to Cleveland Hall, where he took his very first elevator ride to the fifth floor. There, he met Buffalo State President Katherine Conway-Turner and members of her cabinet. Lloyd prepared for the meeting by donning an orange-and-black plaid bowtie in honor of cabinet member Timothy Gordon, vice president for students affairs, who’s famous for his bowties. Lloyd expressed his comfort level with the visit by lying on the floor of the conference room and welcoming pets and belly rubs.

“Buffalo State fell in love with Lloyd, along with everyone else who has read his story,” Madrigal said. “When I learned of Lloyd’s journey, it reminded me of our students and our community. We often see our students put a smile on their face and their best foot forward to better themselves while dealing with struggles from the past or present,” Madrigal said. “These include homelessness, sickness, and loss, which was especially evident during the coronavirus pandemic.”

Lloyd sniffed his surroundings, accepted treats, and posed for numerous photo ops. He was presented with his own library card at Butler Library before being sworn in as an honorary K-9 by Stephen Mayoral, the new chief of university police, in the Student Union lobby. Numerous onlookers attended the ceremony, including Buffalo State football players who presented Lloyd with a stuffed football and cheered him on. Lloyd accepted more pets and belly rubs before climbing into a patrol car for a short ride with police.

He rounded out his visit with “paw art therapy” with students in the lobby of the union and a visit to the campus’s Whitworth Ferguson Planetarium.

Throughout his short visit, Lloyd managed to connect with everyone from administrators to students to campus employees. Madrigal noted how his visit came at the opportune time, as students begin returning to campus for the new academic year.

“Having Lloyd visit Buffalo State now seems like the perfect way to bring the campus together after a difficult couple of years for everyone.” 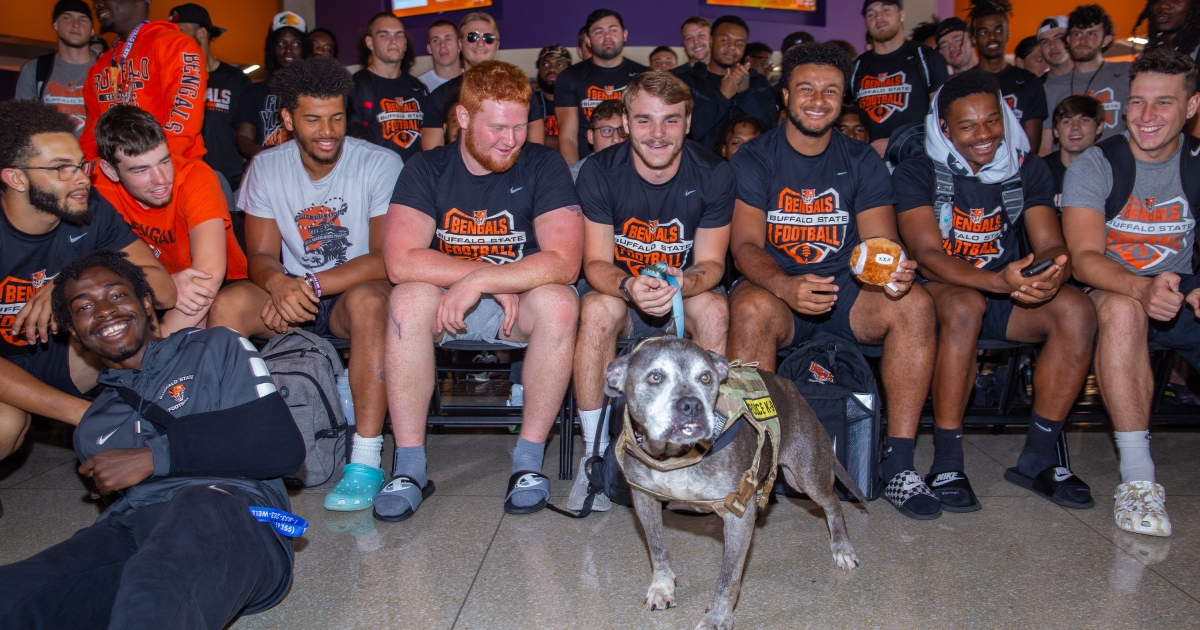 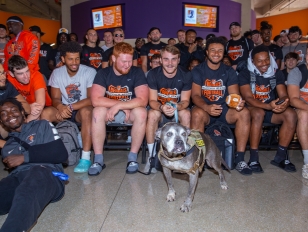