“These students have shown incredible determination, character, and leadership during what has been a tremendously difficult year,” said SUNY Chancellor Jim Malatras. Because of their academic excellence, commitment to social justice, volunteerism, and visionary spirit, these students stand out among the more than 394,000 students pursuing their degrees at SUNY’s 64 colleges and universities throughout the state. “Congratulations to all the winners, and a heartfelt thank-you for making the SUNY system proud.”

The Chancellor's Awards for Student Excellence were officially awarded by SUNY during a virtual ceremony on April 14. Buffalo State's winners will again be recognized during the college's virtual 149th Commencement ceremonies on Saturday, May 15. 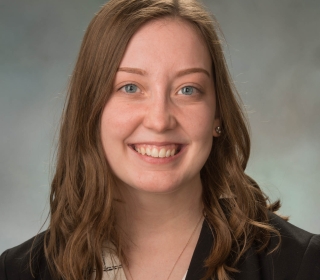 Kelly Glowny has earned a bachelor of science in childhood education with a mathematics extension, attaining a 3.97 GPA while participating in the rigorous Muriel A. Howard Honors Program.

An aspiring mathematics teacher, Glowny is an active and engaged student leader. She continually pursues opportunities to build her skills, participate in new experiences, and contribute to her community. Her insatiable curiosity and passion about both science and the art of teaching and her joy in engaging with colleagues and children is evident every day.

Glowny has conducted numerous research projects that she has presented on campus, locally, and nationally. The first, supported by an Undergraduate Summer Research Fellowship, examined access to opportunity for students across Western New York. She presented her findings at the Student Research and Creativity Conference, the Professional Development Schools (PDS) annual conference, and the National Association for Professional Development Schools (NAPDS) conference. This led to subsequent research on opportunities and access local children have for play.

She cofounded and serves as president of the Future Teachers Club at Buffalo State College, a student-led group that provides networking, professional development, volunteer, and leadership opportunities. She has participated in the International Professional Development Schools (IPDS) programs in Chile and Italy and shared her experiences as an IPDS student ambassador. She became a face of the program, attending all events and assisting with programming. In addition, she is a fellow in Sophia’s Legacy, the social justice fellowship of the college’s Anne Frank Project.

The recipient of numerous merit-based scholarships, she has also earned an Undergraduate Travel Award, an Early Undergraduate Research Opportunity, and an Undergraduate Small Grant Award. She has been inducted into Kappa Delta Pi, an international honor society in education, and has participated in numerous service-learning experiences that benefited the community. 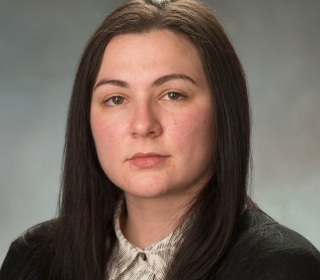 Lila Rollo has earned a bachelor of science in social work, attaining a 3.95 GPA while having worked in her chosen field as the integration program coordinator at the International Institute of Buffalo. Her department has been recognized as a best practice site for affiliate resettlement programs.

Rollo combines her academic acumen, community involvement, and strength of character in pursuit of a greater good beyond personal recognition. Academically, she demonstrates excellent oral and written communication skills, outstanding analytical abilities, and continual growth in knowledge and application of social work theories on the micro, mezzo, and macro levels. Despite her many accomplishments, she remains humble in her interactions with peers, sharing her time and skills without pretense.

Rollo has a passion for macro and political social work, including police reform, anti-racism efforts, and refugee resettlement. She applies this passion to her coursework and actively engages in local and state-level movements and initiatives to bring about substantive change in her community. Her field practicum with Catholic Charities Domestic Violence Program for Men is one example of her ability to offer support and connect with diverse populations.

On campus, she helped start a study group for Arabic-speaking students to offer general peer support, interpretation, and skill development. She also traveled to Rwanda with the college’s Anne Frank Project and was a presenter at the 2019 AFP Social Justice Festival.

Rollo works with refugee and immigrant families affected by poverty, mental health issues, homelessness, and special needs. Recently, she assisted in the creation of policies and case management procedures for the Center for Refugee and Immigrant Services Inc., a nonprofit group dedicated to serving the East African immigrant community. She also teaches English and civics to elderly immigrants to help prepare them for the citizenship test. Her accomplishments were recognized with the prestigious 30 Under 30 Award from Buffalo Business First in 2000. 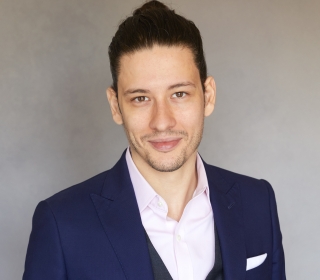 Matei Schwartz has earned a master of science in creativity and change leadership, attaining a 4.0 GPA, as a Romanian citizen who paused the professional life he had started to relocate to Western New York to fully immerse himself in his studies. He has endured through the pandemic, making significant contributions to the college.

Noted for his intellectual ability, leadership, and community service, Schwartz is highly motivated and committed to excellence. He has excelled at serving the international community, including representing Europe on the World Creativity and Innovation Day and Week global advisory board.

Widely read and with an impressive breadth of knowledge, Schwartz is a key driver of class discussions and an inspiration to his peers. He is able to use his experience to make theories and research findings more relevant for others. He has concentrated his academic research on the intersection of branding, leadership, and creativity and is partnering with a faculty mentor to produce a scholarly paper on the topic for publication.

Schwartz has also served as a graduate assistant in the Creativity and Change Leadership Department and as a project lead in the department’s marketing and rebranding initiative. He guided the faculty through a branding process that resulted in a new name for the department, a new name for the master’s degree, and completely new content for its website. His presence, preparation, and leadership as a graduate assistant were critical in securing a $100,000 planned gift in support of a new Innovation Suite in E. H. Butler Library.

Schwartz is applying his research to numerous professional and volunteer consulting opportunities in Romania. He has served as a presidential campaign consultant for candidate Theodor Paleologu, project lead for a new Center for Creativity and Innovation and annual creativity conference in Romania, brand and innovation consultant for the accounting firm RSM Romania, and workshop facilitator for a creative thinking event for Romanian schoolchildren. 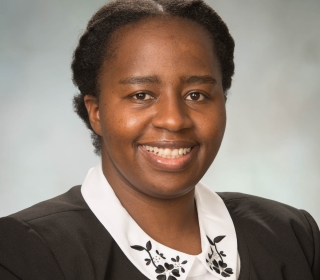 Victoire-Grace Karambizi has earned a master of arts in biology, attaining a 4.0 GPA while serving as a model student in terms of academic standing, community service, and leadership experience. She has overcome tremendous obstacles—fleeing violence in Rwanda, growing up in refugee camps, and resettling in Buffalo as a first-generation immigrant.

Karambizi has participated in numerous research opportunities at the college and has been successful in synthesizing a series of new peptidomimetics, small synthetic molecular chains designed to mimic natural proteins. As a student researcher in the Roswell Park Comprehensive Cancer Center’s Pathology Department, she is testing the efficacy of these compounds in heart cells alongside professional scientists. With a B.A. in chemistry and an M.S. in medicinal chemistry, she served as a senior research aide in the Buffalo State College Chemistry Department. She shows her compassion and shares her knowledge as a chemistry tutor and mentor for fellow students, and she has guided three undergraduate students in completing research projects. She has a deep interest in making public education more accessible and equitable for English language learners, which she herself once was.

An intellectually mature student, Karambizi leads by example. She learned scientific techniques in a resoundingly short time and is meticulous and painstaking in her work. Her final reports and scientific writing were much admired by her mentors in the Biology and Chemistry departments.

A SUNY graduate diversity fellow and a recipient of a SUNY Summer Research Incentive, Karambizi aspires to be a psychiatrist. She plans to work with those who have been affected by the tragedies of violent conflict, such as refugees, active soldiers, and veterans.

Outside the classroom, Karambizi is a board member, blogger, mentor, and analyst with Femmes d’Espérance, an international nonprofit organization dedicated to celebrating, empowering, and promoting women, specifically racial minorities. In addition, she is very active in church activities and has worked as a caregiver and care coordinator for Touching Hearts at Home and Catholic Charities, and as president of the Buffalo Immigrant Leadership Team. 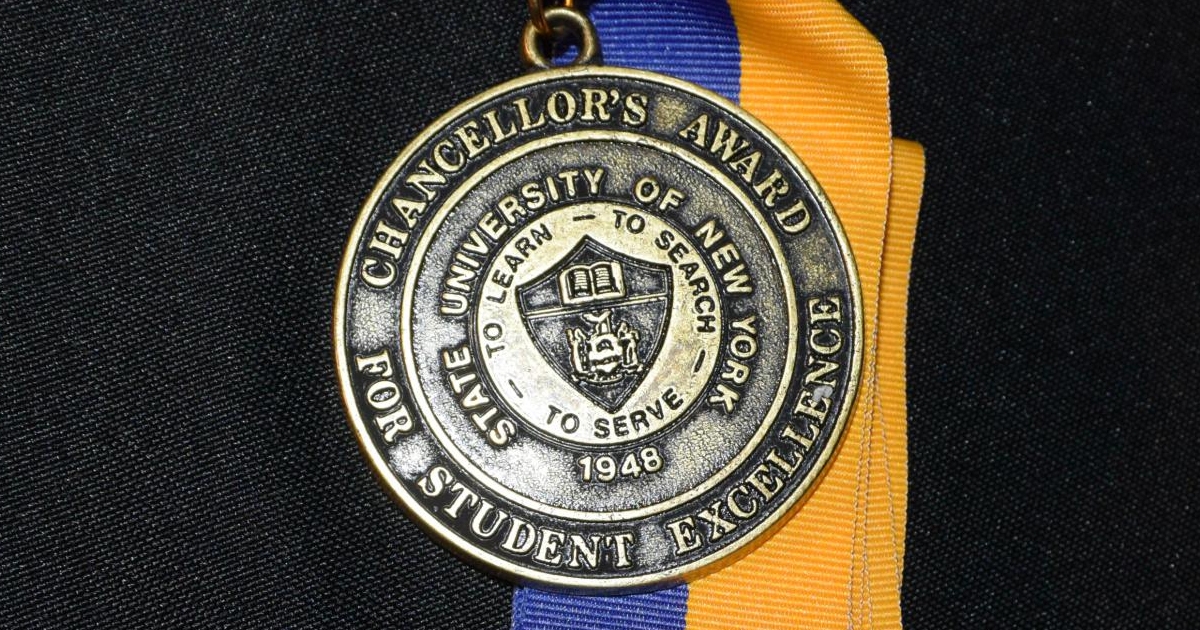 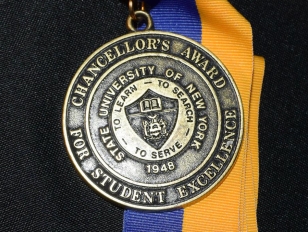