A 6-foot-by-4-foot white board in Kris Kaufman’s Buffalo State College office provides a glimpse into the gears that keep the campus’s 125 acres and 45 buildings—including its fleet of state-issue vehicles—up and running year-round.

Under such categories as plumbing, electrical, grounds, and HVAC (heating, ventilation, and air conditioning), Kaufman has listed in red, black, and blue marker the ongoing jobs and preparations for upcoming inspections across the campus.

“They are just a portion of the jobs in progress,” said Kaufman, Buffalo State’s director of maintenance repair and residential planning, whose office is part of the Facilities Construction and Maintenance Department.

The lists speak to the volume of work that flows into a command central of sorts in Kaufman’s unassuming office on the second floor of the Clinton Center. The 50 employees who work under the maintenance repair umbrella handle the campus’s behind-the-scenes but crucial jobs—power outages reversed, water leaks stopped, broken sidewalks repaired, locks changed, snow plowed, grass mowed, and flower beds weeded.

“What goes into building maintenance are things you don’t typically think about unless something breaks,” Kaufman said. “It’s like maintaining a small city.”

Kaufman is quick to point out that several staff members who report to him each handle a different part of the mammoth operation.

“It’s a collaborative effort,” he said.

“What goes into building maintenance are things you don’t typically think about unless something breaks. It’s like maintaining a small city.”

“The work can involve anything from repairing toilet partitions to investigating and sealing a roof,” Kaufman said. “His workers also repair and replace masonry tiles and do ceramic tile work, caulk joints, repair sidewalks, and handle various painting projects.”

Meanwhile, when the first heavy snow falls, the grounds crew, who work under grounds supervisor Earl Morris, will plow campus roads and parking lots before most Buffalo State employees are even awake.

“They start their shifts at 6:00 a.m. and try to hit all the public areas before other employees report to campus,” Kaufman said. “If we have a really big storm, employees from other areas will help out, sometimes starting as early as 2:00 a.m. We try to prepare the best we can, but this is Buffalo, and weather can change on a moment’s notice.”

Other workers who fall under Kaufman’s purview have to make swift adjustments, too. For instance, the HVAC team, overseen by Michael Brown, quickly installed MERV-13 air filters throughout the campus’s ventilation systems in response to COVID-19 safety protocols in summer 2020.

That flickering light bulb you called about? Frank Richey’s team responded to that, along with all the other electrical installation and maintenance needs of the campus. Cheryl Byer oversees the lockshop, which cuts, issues, tracks, and maintains the thousands of locks and ever-circulating keys across campus, along with overseeing the department’s call center, where office assistants Dana Fredo and Robert Fuller field the myriad of work requests.

Topping it off are the campus mechanics, led by Tony Rychlik and Kody Dreyer, who service the fleet of 100 state-issue vehicles, from front end to tail pipe. And Building Maintenance Team supervisors Arlene Eagan and Randall Marinchek keep everyone on the second and third shifts organized.

“Every great organization has support staff who assist with the work at hand,” Kaufman added, citing his assistant, Brenda Peacock, who helps keep him on task.

“Year-round, we’re always busy,” Kaufman said. “Along with responding to requests for maintenance, we have to prepare for regulatory inspections. After each inspection, we receive reports and then make any needed repairs.”

The proliferation of home improvement shows that make renovations look quick and easy do not accurately portray the scope of his office’s workload, he quipped. “A lot of jobs we handle on campus are very complicated.”

Kaufman joined Buffalo State 30 years ago, handling facilities maintenance and custodial operations, along with overseeing capital renovation projects for the Residence Life Office, before stepping into his current role in 2018. And he found this career almost by serendipity.

After earning a bachelor’s degree in public justice from SUNY Oswego, Kaufman said, jobs with police departments were hard to find, so he looked for a meaningful graduate program. He discovered Buffalo State’s higher education administration program and earned a master’s degree in 1989. While a graduate student, he landed an assistantship with the Residence Life Office, coordinating weekend trash removal and minor furniture repair and replacement in the residence halls.

“When I took this new job,” he said, “I felt like I came full circle.”

Until very recently, Kaufman worked closely with Michael Dombrowski, who retired from his position as maintenance manager right before Thanksgiving.

“Mike is definitely going to be missed,” Kaufman said, adding that over the past three years, he worked with Dombrowski to reorganize the department, creating more efficiencies and making improvements in the way services are delivered. Because of retirements and other attrition, the office has several vacancies. “Even with a smaller staff, we’ve made a marked improvement in the campus’s appearance,” he said.

In addition, his office collaborates with many other campus departments—from Accounts Payable to University Police—to ensure that the campus is safe and functioning smoothly.

“No one office can singularly handle all that needs to be done to keep the campus running,” he said.

As the year progresses, Kaufman erases completed jobs from his white board and adds new ones.  “There’s a lot of dedicated people who have worked here a long time,” Kaufman said. “They really have Buffalo State in their heart. That’s why they stay. They are highly skilled and take a lot of pride in their work.” 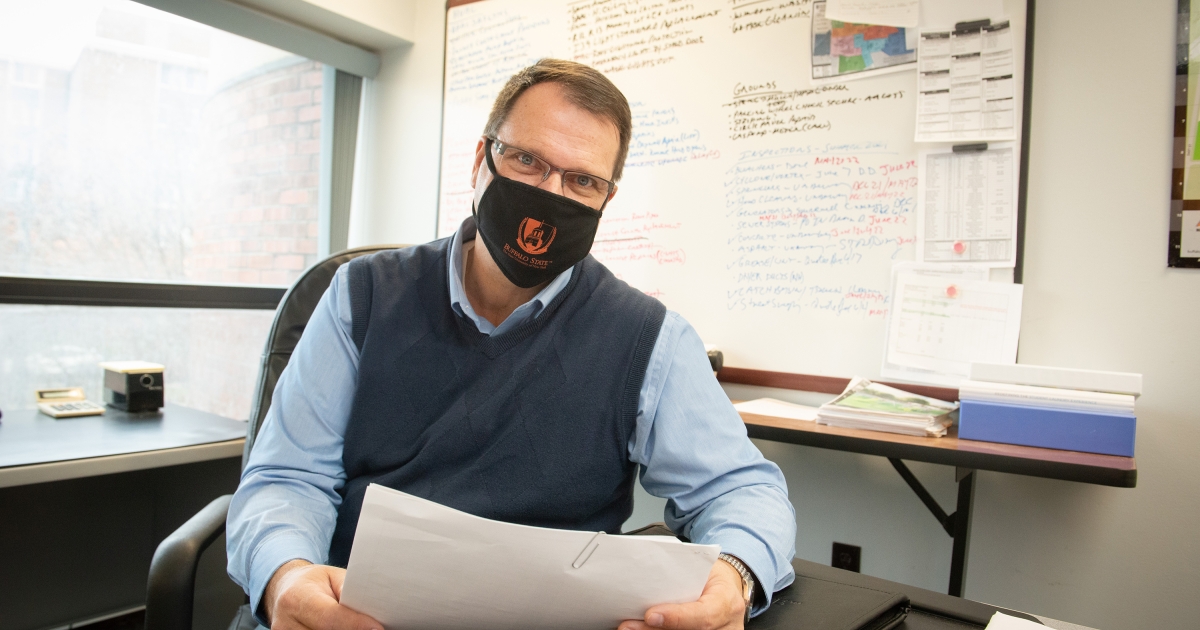 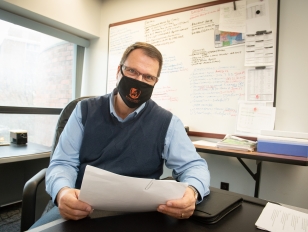