While Sean Mapp was still a student at Buffalo State College, he became a self-made executive as founder and CEO of his mass media production company, the Avenue Code.

Fast-forward to postgraduate life: Mapp has established himself as an innovator in mass media production and was even named an honoree at the 2018 Changemakers 30 Under 30 Awards, the largest millennial-focused award ceremony in Western New York.

Reflecting on his hardships, however, allows him to appreciate how far he’s come.

“I can’t imagine having success without the trials and tribulations,” Mapp said. “It just would never feel this good.”

His journey is a prime example of the statement at the forefront of his company: Behind every brand there is a story.

Before establishing his personal brand, Mapp began developing his professional brand at Buffalo State, not long after transferring to the college in 2011.

After moving from Yonkers to Buffalo in 2006 to play football at Erie Community College, Mapp found his plans changed by both the birth of his daughter and the death of a close friend.

“My mindset was different this time around,” he said of transferring to Buffalo State after graduating from ECC. “While going through that level of depression, I had to ask myself, Is what I am doing going to matter in the long term? Building generational wealth was the path I needed to take.”

Finding a Love for Media Production

Combining his experience of being a team player with his vision of ownership, Mapp shifted his focus to media production, a long-time passion of his, after hearing former VH1 president and BSC-TV co-creator Tom Calderone, ’86, speak in one of his classes.

In time, Mapp found Buffalo State to be the perfect incubator for creating his platform when he realized local media production companies weren’t offering the type of experience he had hoped to gain in the field.

Creating His Own Opportunities

“If I wanted any chance at work at my dream position, I needed to create my own opportunities for experience,” he said. “With the support of family and friends, I took the initiative and created my first company, the Avenue Code.”

The Avenue Code quickly evolved into a leading source of media production, as Mapp found himself producing content for a number of organizations, profiting and gaining experience simultaneously.

Needing to focus on his thriving business, Mapp left his double-major in media production and business administration to pursue being a full-time entrepreneur.

Eventually, he would return to Buffalo State with an idea inspired by his time playing college football.

“I felt that TAC could be much more than creating commercials or teasers,” Mapp said. “I wanted to diversify our abilities by creating different ways we offer services and producing new forms of content, so we cultivated TAC from a production company to a mass media production company and started to produce our first original series, SWEAT.”

SWEAT, a nine-episode series that featured an in-depth look at the lives and ambitions of the Buffalo State Bengals, was a hit, not only within the college’s Athletics Department but also among other institutions and organizations as well. The process behind developing the series came with its share of difficulties, Mapp admitted, but the payoff would prove beneficial.

“It was tough, but it was definitely worth it, and it gave me the success that I have now,” he said.

“Your focus should be your passion, no matter what it is. If you graduate from Buffalo State with a degree, but you didn’t pursue your passion and you left it behind, you will regret it.”

Mapp’s formula for success is equal parts visualization and hard work. He said he still looks at his vision board daily, emphasizing how embedding productivity in the subconscious mind influences people to consciously pursue what they hope for.

“I’m a huge believer in the law of attraction,” he said. “Whatever I think about and keep at the forefront of my mind, I work toward it.”

Speaking from experience, Mapp advises students to maintain this kind of focus in pursuit of their ambitions.

“Have a passion,” he said. “Your focus should be your passion, no matter what it is. If you graduate from Buffalo State with a degree, but you didn’t pursue your passion and you left it behind, you will regret it.” 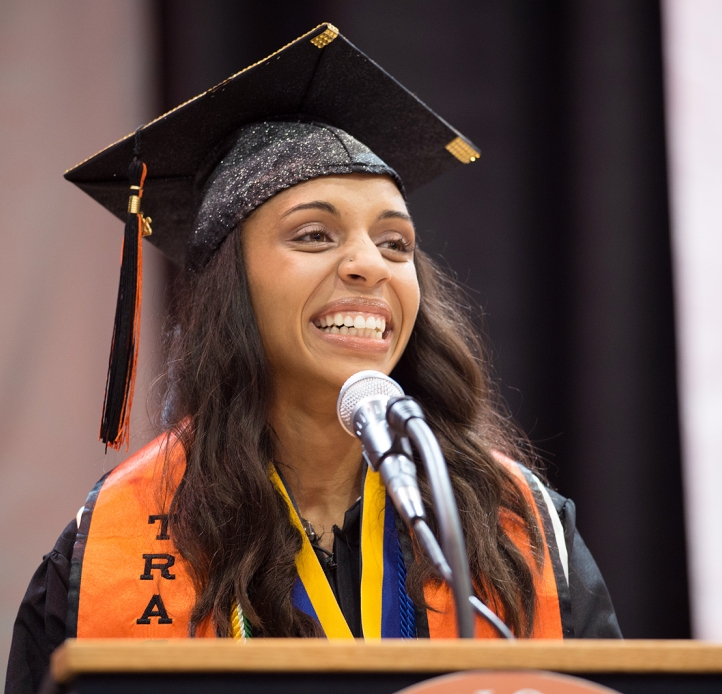