Anyone searching for nuanced pieces of the history of Buffalo State, the city of Buffalo, or Western New York might do well to start in an unassuming room tucked away on the second floor of the college’s E. H. Butler Library.

There, in the Archives and Special Collections, a tall, curly-haired woman with a sharp eye for detail, a near-photographic memory, and a quiet wisdom that belies her 34 years, stands ready to guide.

Hope Dunbar joined Buffalo State as its special collections archivist in 2016 and has since developed a knack for knowing what’s located inside most of the nearly 3,000 archival boxes stacked on 12-foot-high shelves.

Do you need to find a yearbook photo from 1982? Programs from a specific performance at the Studio Arena? The history of the college’s creative studies program? Dunbar assists with all these requests and more, usually through appointments.

“Often people come in thinking they’re looking for one thing, when there’s another thing—or five—that I can help them find,” she said. “Or they don’t really know what they want. They tiptoe around it until we talk in person and figure it out.”

“Often people come in thinking they’re looking for one thing, when there’s another thing—or five—that I can help them find.”

“Dan has been such a supporter,” she said. “He’s a great supervisor who treats me more like a co-worker. Working here is like an apprenticeship. I’ve learned so much.”

The two of them meticulously make collections accessible to the public, respond to incoming requests, organize donated archives, and oversee graduate student workers, among other duties.

“Hope was hired not only for her obvious expertise in traditional knowledge of and demonstrated practice in archival arrangement, description, and patron outreach, but also for her real expertise in emerging technologies,” DiLandro said. “For example, due to Hope’s work, we have been able to digitize tens of thousands of pages of microfilm, primarily editions of the Buffalo Courier-Express and the Monroe Fordham Regional History Center African American–related material.”

Established in 1975, the Archives and Special Collections houses a variety of Buffalo State publications, along with scrapbooks, speeches, photographs, memorabilia, and annual reports, ranging from 1860 to the present, in both physical and digital form. It’s a sacred place where food and drinks are prohibited, notes may be taken only in pencil, and protective gloves are required to handle the photographs.

Popular archives include the Courier-Express Newspaper Collection; the Hank Nuwer Hazing Collection; the Audrey Barrett Gleason Fashion Illustration Collection; and the Madeline Davis LGBTQ Archive of Western New York, which Davis donated in 2009. It has since continued to grow, thanks to donations from multiple individuals.

“I like that the college had the foresight in 2009 to accept and protect the LGBTQ materials,” Dunbar said. “I especially love the T-shirts from the 1970s and ’80s. They were often the only items documenting that a protest or march occurred.”

A native of Chicago, Illinois, Dunbar studied history and political science at Loyola University in Chicago. She said the discipline felt rather abstract until she participated in an undergraduate research seminar at the Newberry Library in Chicago.

“History really came alive for me,” she said. “I fell in love with research.”

Soon after earning her bachelor of arts in 2010, Dunbar pursued a juris doctor with a focus on cultural heritage law from DePaul University. After completing internships with three federal agencies, she ultimately decided she’d prefer to delve into research rather than practice law. She earned a master of library and information science, with a specialization in archives and special collections, from the University of Illinois in 2015.

She noted, however, that she does apply her legal knowledge to her current position with everything from copyright to donor agreements.

“I got lucky to know what I like, and I love what I’m doing,” she said.

In 2014, she relocated to Buffalo, settling in the historic Parkside neighborhood with her husband, a Buffalo native, and began creating her own mark on the city. Along with her position at Buffalo State, Dunbar has volunteered with several local organizations, including the New York State Archives Documentary Heritage Program grant review committee; the Michigan Street African American Heritage Corridor Commission; the Society of American Archivists; and the Western New York Library Resources Council.

Before joining Buffalo State, she worked as the small business librarian for the Buffalo and Erie County Public Library system.

On a typical day, Dunbar might meet with a Buffalo State undergraduate class learning how to use the archives, a graduate student embarking on a thesis, or a donor wanting to pass along a collection.

Undergraduates visiting the archives for the first time often perk up when Dunbar starts pulling out photos and memorabilia spanning multiple decades.

“I think this generation, with everything being digitalized, is nostalgic for tangible objects,” she said.

Retrieving those objects requires Dunbar to climb ladders, pull down 50-pound boxes, and move them from one of the many storage units sprinkled throughout the library to the archives. Thus, you will normally find her donning black jeans and flats.

“This is not a dress-and-heels kind of job,” she said with a smile.

Her biggest pet peeve, she said, is when a researcher is lauded in a news story or movie for having “discovered” something.

“What you don’t hear is that they found something because 10 people worked for years to process a collection and do all the monotonous things you don’t see,” she said. “It’s the archivists who are making it searchable, organized, accessible. Usually, you just see the flashy results.”

Outside of her diligence in processing collections for future discoveries, Dunbar serves as the executive director of Buffalo State’s Faculty-Student Association (FSA), where she handles everything from annual reports to financial obligations.

“It’s a lovely way to be involved on campus,” she said. 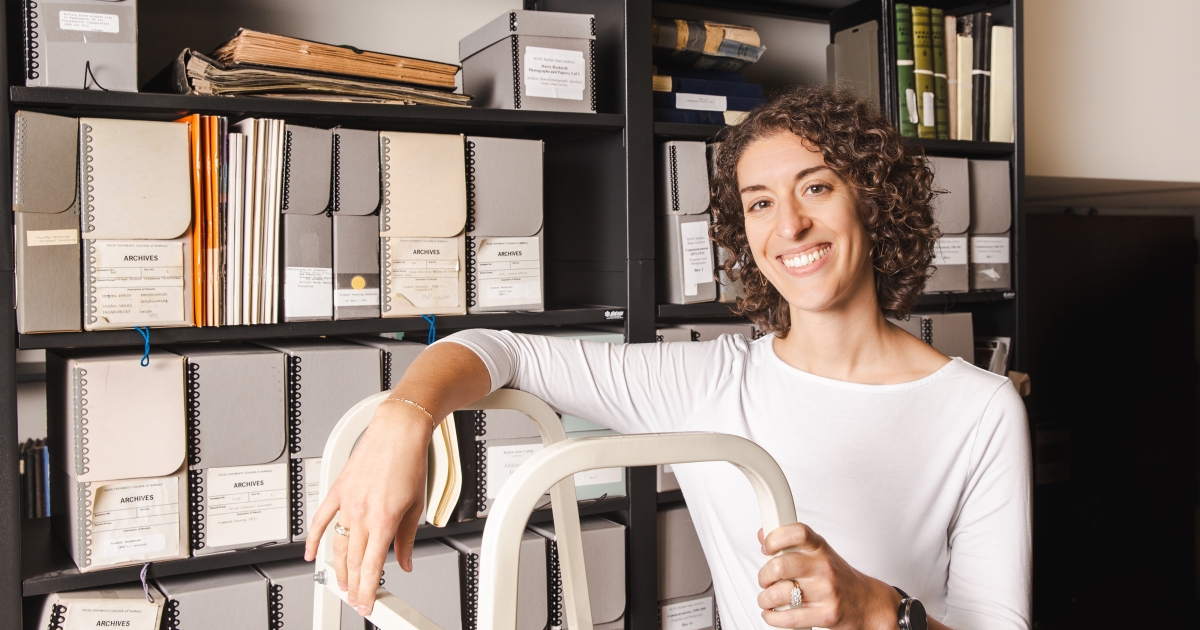 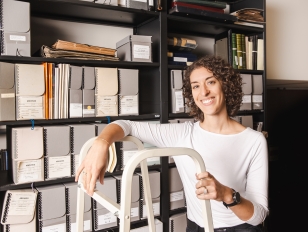