In 1914, the “new Normal” for Buffalo State College had nothing to do with a pandemic. Instead, the new Normal meant a bigger, better building to replace the outmoded 1871 original. 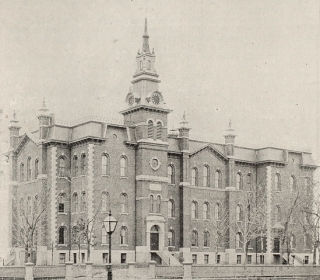 Selkirk’s handsome original 1871 Buffalo Normal School was a three-story French Revival style structure with Mansard roof, faced with red brick and finished with stone dressings and quoins. The 164-foot-long facade fronting Jersey Street consisted of a gabled center and two slightly projecting wings with turrets. Above the main entrance was a stone frontispiece with a 16-square-foot clock tower and a pinnacle that soared 120 feet. The facades fronting York and 13th streets also featured center gables with turrets 90 feet high.

But rapid curricular and enrollment growth in the late nineteenth century gradually made the first college building inadequate. Buffalo State’s expansion paralleled the city’s own impressive boom. By 1900, Buffalo’s population of 352,387 made it the eighth-largest city in the United States.

In the early years, patchwork efforts were made to keep up with Buffalo Normal’s growth. In 1887, the legislature approved $25,830 to build a new three-story Science Hall, which sat behind the 1871 school, 40 feet north of the main building and connected to it by a second-story covered bridge. Students referred to this as the “bridge of sighs,” because it served as a quiet spot for couples to hang out during dance nights at the gymnasium. Also in 1887, a new gymnasium was built to accommodate growing needs.

Desperate for additional classroom space, in 1894 the college moved its second principal, James M. Cassety, [1] and his family from their apartment in the original building to an imposing new residence, whose address was 110 14th Street, still on the campus grounds.

The Principal’s Residence at 110 14th Street.

Efforts to build an entirely new Normal School picked up steam. Just six weeks after Buffalo’s 1901 Pan-American Exposition closed, William Hengerer, secretary-treasurer of the college’s Local Board of Managers and president of the Wm. Hengerer Co., then the largest department store between New York and Chicago, moved that money be found to replace the 1871 building. The following year, board president Edward H. Butler Sr., [2] founder and publisher of the Buffalo Evening News, joined what would become an eight-year fight to secure the funding.

At the urging of the Normal School’s new principal, Daniel S. Upton, [3] in 1909, bills were introduced and approved over the next four years totaling $400,000 in state appropriations for a new building. State politicians and education officials were instrumental in procuring the funds, including Butler; Senator Henry H. Hill, also a Local Board member; [4] and Governor Charles Evans Hughes (later Chief Justice of the U.S. Supreme Court).

Herman W. Hoefer, recently appointed state architect (at an annual salary of $7,500), planned a building modeled after Philadelphia’s Independence Hall. [5] Construction would begin in 1913, but with a hitch: the state architect could not disrupt instruction.

At their June 29, 1914, meeting, Upton and the Local Board voted that no steps be taken to raze the old school until well after August 1.

These tricky construction edicts meant the new building would have to be built around the old. Two of the three new wings of the new school—at the east and west sides—would flank the existing Science Hall, so that natural light would not be cut off from the science building. The principal’s grand residence at 110 14th Street was hoisted onto timbers and hauled to another location on campus.

Construction site, spring 1913, showing the Principal’s Residence still on timbers after having been moved from its former location. 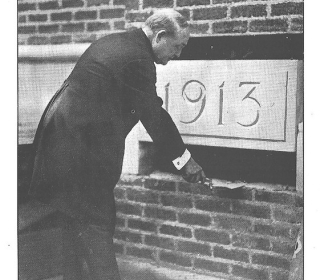 When Butler laid the cornerstone for the new Normal School with a silver trowel on October 9, 1913, 500 Normal Department students and additional staff and dignitaries encircled the stage for the celebration. And nearly 400 pupils from the School of Practice looked on from the fire escapes and through windows of the still-occupied 1871 building.

“The Song of the New Normal,” a poem by H. J. D. published in the November 1913 edition of the Record, reflects the excitement and tribulations of attending classes in the old building while watching the new one rise up: “In the days when leaves are falling / Fall the blows of busy hammers …/ ’Tis the music of the builders / ’Tis the song of the new Normal.”

In closing, the poem expresses faith in a new age on Buffalo State’s original West Side campus: “Thus this day laid firm foundation, / Cornerstone of a new era, / Nineteen thirteen’s inspiration / To the Normalites forever.”

The massive new steel-framed structure was erected by Eastern Concrete Steel Company of Buffalo between 1913 and 1914 in a Colonial Revival style with an exterior of stone, red brick, and terra cotta elements.

Sadly, Butler would not live to see the new building finished. He died in March of 1914 at age 63.

Enough construction was completed for the new Normal School building to open for classes in September 1914. It boasted ample classrooms and labs, a new cafeteria with food prepared by the female Junior Household Arts students, a three-room library complex with roughly 7,000 books, a gymnasium with a basketball court that was “the best in the city,” a 1,000-seat auditorium, and a separate room for the staff of the Record overlooking the courtyard—a public space that eventually included a fountain, sun dial, and benches.

The razing of the 1871 “old Normal” began in early November 1914, stone by stone and wall by wall. While classes were underway in the new Normal, the original building’s demolition created mountainous piles of brick and stone, heaps of wooden slats lying about, mounds of dirt, dismantled and stacked old wrought iron fence panels, and temporary walkways six planks wide for horse-drawn wagons and wheelbarrows to cart away the debris. Much of the demolition took place amid mud and snow.

View of the new building nearing completion, looking west from the old Normal School, which can be glimpsed at right.

When the disorder finally settled, a new kid on the block, in the form of a modern, well-equipped “new Normal School” circa 1914, had emerged at Buffalo State. Yet, even though the new Normal was designed to meet the college’s needs through the 1960s, it, too, soon became obsolete.

In 1931, students and faculty moved to a new five-building Elmwood Avenue campus. The new Normal building was turned over to the Buffalo Public Schools and renamed Grover Cleveland High School. Today it is known as the International Preparatory School.

(Sources for this story include New York State College for Teachers at Buffalo: A History 1871–1946, by Andrew W. Grabau, Charles A. Messner, Harry W. Rockwell, and Kate V. Wofford [1946]; These Were Builders, by Sister Martin Joseph Jones [1973]; and an assortment of college catalogs and issues of the Elms and the Record. College archivists Hope Dunbar and Daniel DiLandro of Butler Library’s Archives and Special Collections provided invaluable photos and documents, as well.)

Tom Reigstad is a professor emeritus of English who teaches a popular course on baseball and culture at Buffalo State. He is the author of Scribblin’ for a Livin’: Mark Twain’s Pivotal Period in Buffalo, and for the college’s 150th anniversary, he wrote the history of the English Department, which can be found on the department’s website.

[1] Buffalo State’s Cassety Hall is named for him.

[2] Buffalo State’s E. H. Butler Library is named for him.

[3] Buffalo State’s Upton Hall is named for him.

[4] Stephen Grover Cleveland also served on Buffalo State’s local Board of Managers from its inception in 1871 until 1886. During his 15-year tenure on the board, Cleveland functioned as a prominent local attorney, sheriff of Erie County, mayor of Buffalo, governor of New York State, and even during the initial year of his first term as U.S. president (1885–1886). Buffalo State’s Cleveland Hall is named for him. 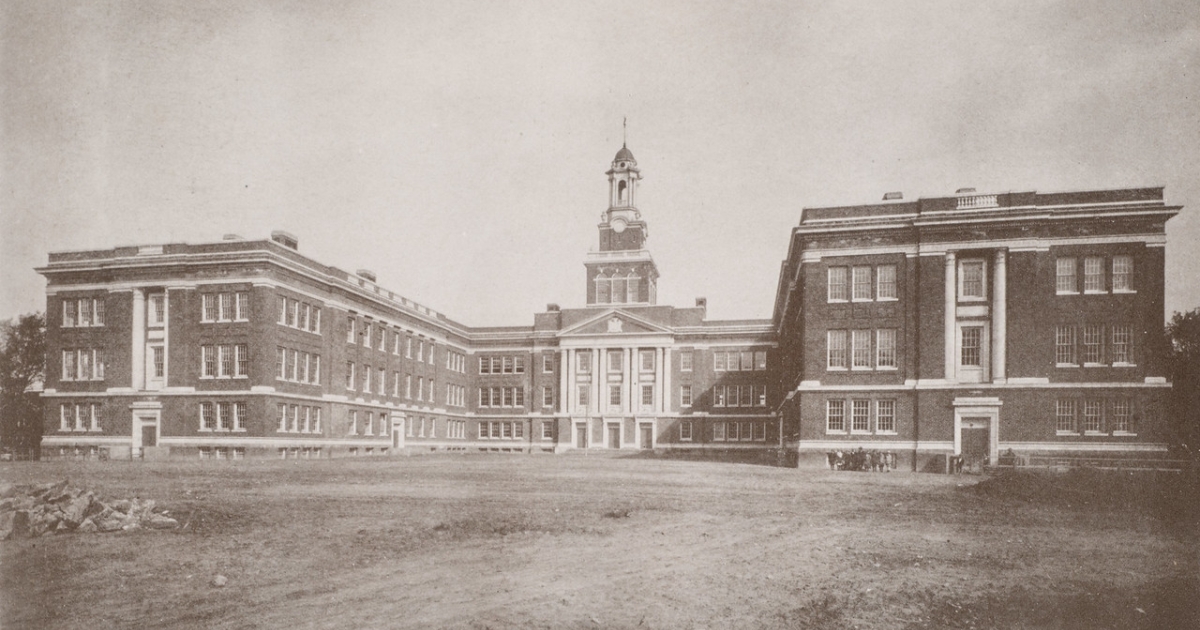 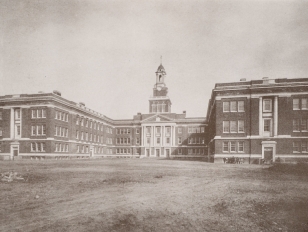